Assuming you’re starting a war rather than finishing one, what questions do you ask when considering your next conquest in Total War games? Personally, all my priorities can be distilled in one: ‘can I take it and hold it without pissing off anyone meaner than me?’ Weak neighbours with no friends trigger my conqueror’s Pavlovian response.

I’m excited about A Total War Saga: Troy because it’s made me think differently about this for the first time in ages.

Every non-capital settlement is associated with one of Troy’s five new resources: food, wood, stone, bronze, and gold. Each has a use that you’ll need to consider in your devious plans: all units cost food to recruit and maintain, but at the mid-tier they’ll cost bronze, too. Basic buildings cost wood, while advanced ones need wood and stone. Gold has a range of functions and – in another Total War first – its deposits can be exhausted, so supplies are finite. Your conquests will now be guided by the acquisition of specific resources, a reality of warfare since time immemorial, and which is thus long overdue for representation in Total War.

You can harvest a resource in several new ways. If you snag a food settlement and only want some quick exploitation to supply your armies, you could build hunting grounds for a huge food income in exchange for an equal penalty to growth. If you’re serious about long-term development, you’ve got a choice of pricey building chains – such as farmlands or grain carts – that offer better payouts for lesser penalties, but only after much greater investment. 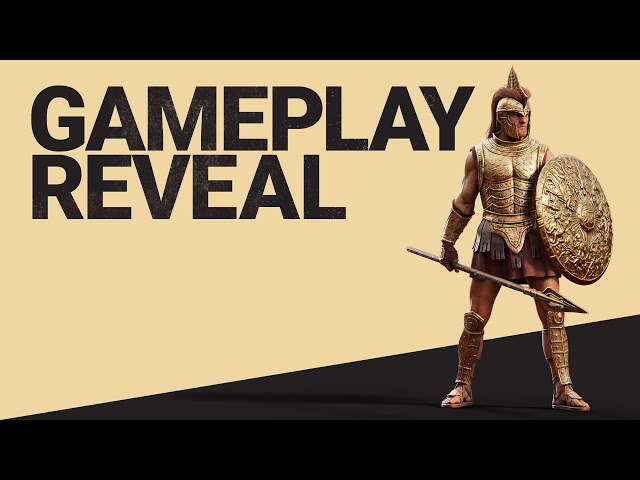 The Spartan king Menelaus, whose cuckolding by Paris catalyses the Trojan War, is an ideal hero with which to learn these nuances. He can settle any unclaimed province that he can see without needing to march an army there – and I get greedy as soon as the campaign starts. Taking an impish designer’s bait, I remote-settle a province with a gold deposit in the heart of distant Crete. I know I can’t possibly defend it, I’m just curious to see if the AI will punish me for the rash overextension, so I’m (almost) heartened when my new neighbour Aptera declares war, takes the settlement, and joins Paris on My List.

Through decrees, buildings, and Poseidon’s blessings, I raise a second army… and auto-resolve still predicts a close defeat

Used more sensibly or opportunistically, this is an exciting mechanic that gives a lot of options in the right circumstances. As Menelaus, my most urgent problem is not conquering Crete but consolidating my starting province of Lacodemon, and the biggest obstacle to this happy event is Cythera, its final settlement. It’s held by an army and a strong garrison, and rather than risk my army (and limited hands-on time) in a manual fight that I’m not sure I’ll win, I commit to my usual tactic of raising a second army to tilt the auto-resolve in my favour.

This usually isn’t too difficult in other Total Wars – at least on Normal difficulty – but I’m pretty sure it’s been made more expensive in Troy to reflect the new multi-resource economy, and my food balance and income soon approach zero. But the multi-resource economy also means I have a range of new options. 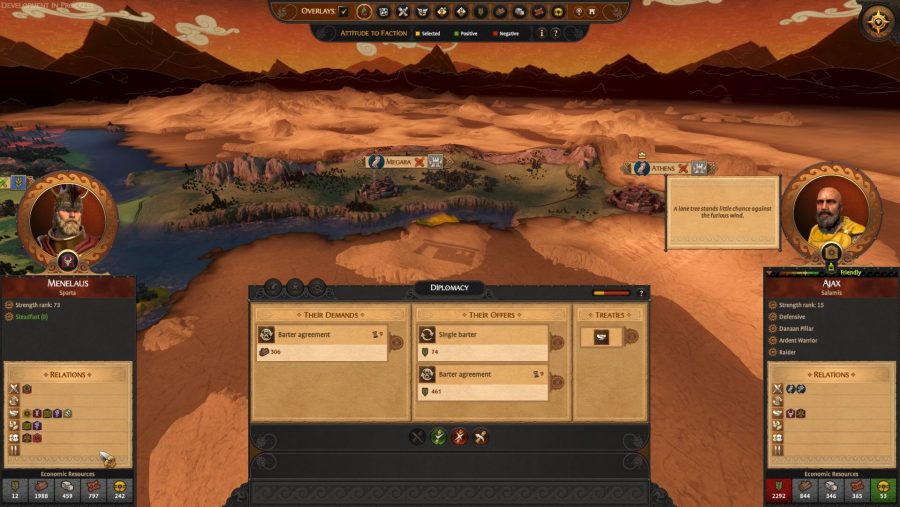 Most obviously, just because my army has wiped out one currency doesn’t mean I can’t still develop my cities. My stocks of wood and stone are very healthy and I can invest in more food production, or indeed anything else. It’s hugely liberating that empire development no longer slows to a crawl when I need more armies on the field.

The new day/night cycle captures that unique, filmic light that’s so special about the Mediterranean

Trade, technology, and the gods all provide more creative means of feeding my troops. Having five resources means you can truly barter with other leaders now, negotiating either one-off or recurring exchanges of a surplus resource for another you lack. The AI is a big fan of this, and while Troy’s end-turn process is nice and snappy (thanks to recent tweaks borrowed from Warhammer and Three Kingdoms), it’s interrupted by idiots asking for 100 bronze in exchange for 10 wood, or something similarly insulting, just often enough to grate. The AI will only offer a good deal if you’re on good terms, and I come to value my friendships with Ajax and Nestor – turns out he really is the wisest of the Greeks – for the fairness they bring.

Read more: Check out the best strategy games on PC

The tech tree – now called Royal Decrees and arranged in groups by the five resources – can bolster your income and provide the usual range of factionwide benefits, but none are so interesting as those provided by Troy’s seven fickle gods. Their blessings stack as you rise through three tiers of their favour – for example, here’s what you get as you win the esteem of bloodthirsty Ares: +1 local recruitment capacity and +40% morale to sword and axe units at tier one; +50% income from raiding, looting, and sacking, +1 happiness per war, +40% melee attack to sword and axe units at tier two; and at tier three, +20 charge to all units, all heroes frighten enemies in battle, and you get to recruit Spartoi. 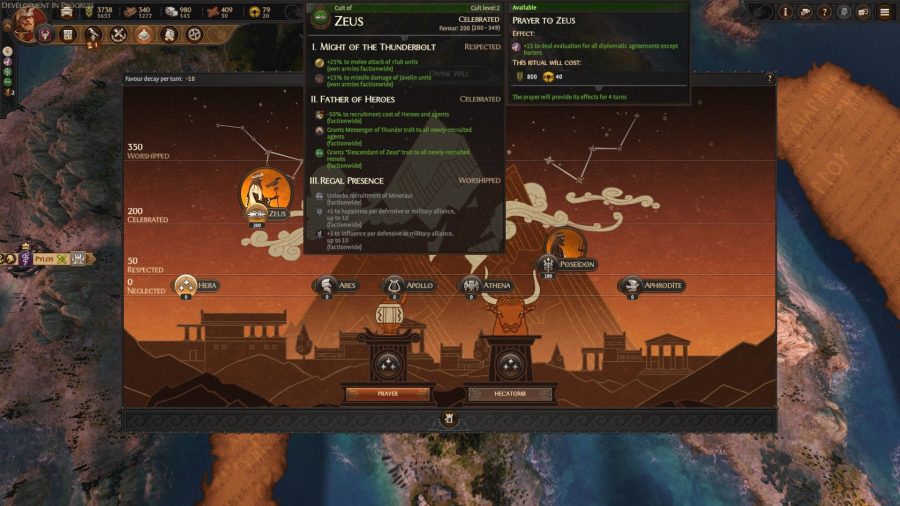 Maintaining a god’s regard is easier said than done, however, especially if you’re courting more than one. A hecatomb is a ritual that boosts your favour by 70 points for a modest cost in food, but can only be performed every five turns. Given that favour decays at -10 per turn, hecatombs alone will barely maintain your standing with just one god. You need to supplement them by building temples, which you can only do in province capitals, thus larger empires will have an easier job appeasing the gods.

I need more than the allotted 40 turns to say how this shakes out, but there are penalties for neglecting the gods, so there’s clearly a balance to be struck here. Sparta got hit by an earthquake three times during my game in an event blaming it on Zeus’s wrath, despite me having accrued the first tier of favour with him. The damage was light and cheap to repair, but did take three turns for certain advanced buildings, which is immensely frustrating when I’m trying to recruit an army from them.

To my pleasant surprise, one of my conquests in Asia Minor is native to a tribe of master horsemen – the Centaurs

I spot one or two other minor blemishes. In cutscenes, this era’s famous heroes look as flat and fuzzy as they do in the trailers, which have been criticised – accurately, I’m afraid – for falling short of the high standards CA set with Warhammer and Three Kingdoms. This is a real shame because it honestly doesn’t reflect the in-game experience – characters mostly look fine, and the map and the lighting are truly breathtaking. The new day/night cycle, in particular, captures that special, filmic light that’s unique to the Mediterranean, creating clear night skies, rust-red sunsets, and bright vibrant mornings.

I enjoy the handsome bronze-and-black colour scheme in the interface, but there’s a lot of empty space in certain panels compared to Warhammer’s faction-specific embellishments or Three Kingdoms’ inkwork. This gives them an unfinished feel, like the remnant of a purely functional UI from the early stages of development. Certain elements, such as icons and text, are also far smaller than fans will be used to, making them hard to find and fiddly to click. 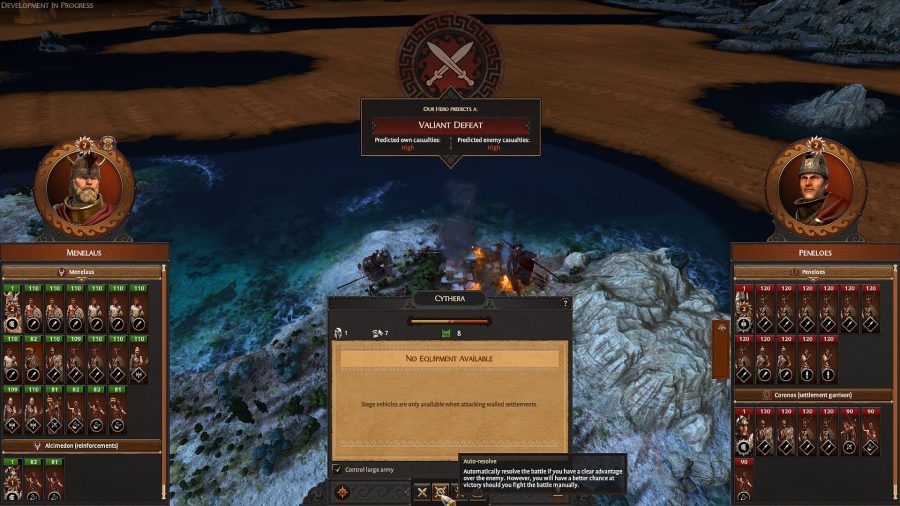 Through a combination of decrees, buildings, Poseidon’s buff to food production in coastal cities, and a bit of raiding, I raise a modest second army… and auto-resolve still predicts a close defeat. (Auto-resolve predicting the outcome, rather than just showing you the balance of power, is a new feature. In my experience it was always accurate, removing all the guesswork and the ‘screw it, maybe I’ll get lucky’ from auto-resolving battles.)

Having exhausted my options to strengthen my forces, I accept the result and focus on outproducing Cythera to take the city with a second assault. I succeed, sail to Crete, and have a much easier time wreaking my revenge on Aptera, but then my time with Menelaus is up. However, the build also lets me take his nemesis Paris for a spin.

Paris’s campaign is rated harder – presumably due to an invading Greek king with multiple settlements on nearby Lesbos – but I have a much easier time of it. I’m surrounded by allies including my big brother Hector, with whom I share Lesbos after kicking the Greeks out. With that, I have no hostile powers anywhere near me, and have to actively search for new territory to take – hence my opening question about where to attack next. As Menelaus, the choice was obvious, but as Paris the question is more interesting than it ever has been. 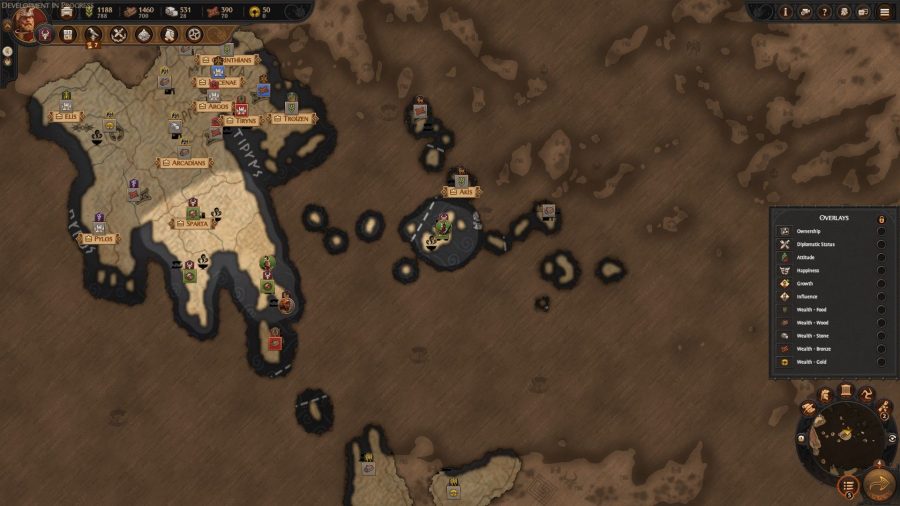 In the end I’m obliged to start an unprovoked war against some affable but isolated minor powers east of Lesbos, and I leave Paris’s campaign having taken a huge chunk out of Asia Minor after about 30 turns. One of my new lands is home to a tribe of master horsemen – the Centaurs. Not all mythological units are unlocked by the gods – some are found in special places.

With Troy’s take on the Aegean Sea apparently comparable in size to Mortal Empires, according to CA Sofia, this is yet another reason why that question – which territory to take next? – promises to be more meaningful than in any other Total War.

ENJOY THE GORGEOUS ORIGAMI WORLD OF A TALE OF PAPER