TDH-Publisher, the studio behind the Google Play Editors’ Choice award-winning Animal Restaurant, invites players to experience a roguelike MMORPG through a retro pixelated wasteland filled with hundreds of monsters, bosses, pets, tons of loot to earn and customize, and a deep PvE and PvP combat system.

This. Is. Bit Legends.

Bit Legends has players starting their adventure as a new member of a wasteland community setting out to explore a vast world where mankind struggles to survive. During their adventures, they’ll fight, capture, and evolve a wide variety of monsters to build up their team while also picking up loot which can either be equipped, upgraded, or dismantled to earn resources that will aid in their journey. As players progress and complete missions, they’ll earn experience points that can improve their core attributes: strength, attack, and agility. They’ll also be given the opportunity to choose one of three classes – Bounty Hunter, Kung-fu Master, or Engineer – each with their own talents, weapon preference, and skills. 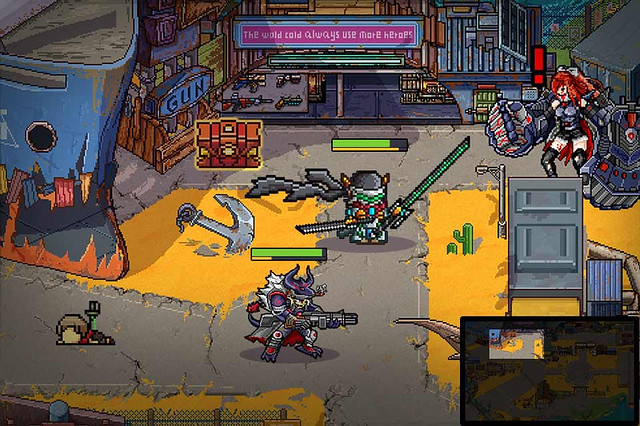 As with most MMOs, Bit Legends’ wastelanders can interact with one another in a number of ways that include adding friends, building guilds, and grouping together to tackle raid dungeons (PvE) or compete in ranked arena battles (PvP). When players need to take a break from the continuous fighting, they can take some time to customize their character’s equipment, mount, and accessories to stand out from the crowd, deck out their hero base with various flairs, and even go fishing.

Bit Legends features hardcore retro-pixel style graphics with a story revolving around how the Gods relate to the wasteland and how you and your fellow wastelanders play an integral role in mankind’s future.