According to Activision Blizzard (NASDAQ:ATVI) , net in-game bookings for Call of Duty reached a new quarterly record, doubling versus the prior quarter, and quintupling from the same quarter in the prior year. There are now 75 million registered players for Call of Duty: Warzone and 125 million monthly active in the company’s Activision segment (up from 102 million in the first quarter). Warzone and Call of Duty more broadly — including Modern Warfare and Mobile — drove a significant beat and raise for the game publisher, which reported $1.93 billion in revenue for the second quarter (+38% year-over-year) 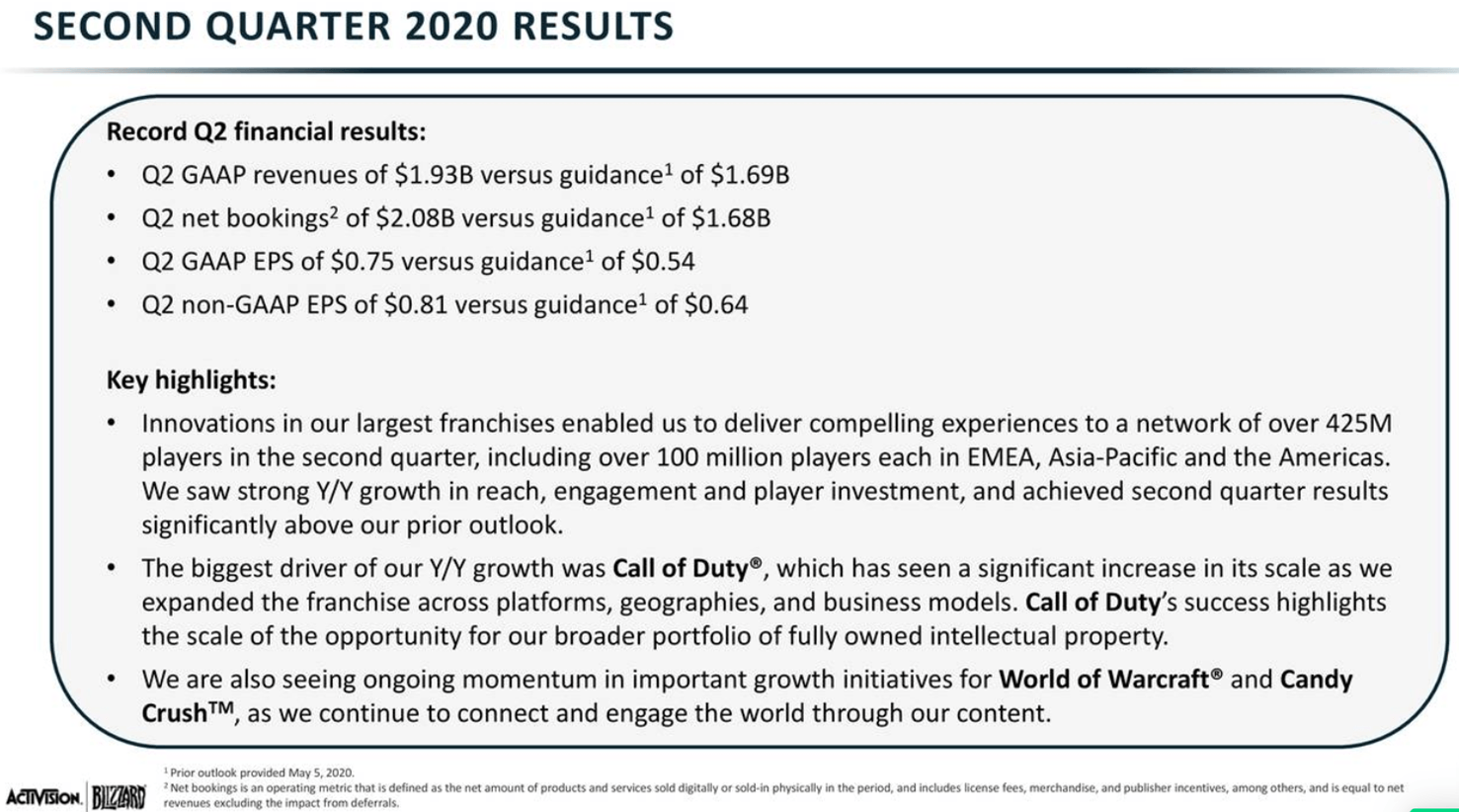 Can ATVI sustain its growth?

Gary Alexander at Seeking Alpha highlights one of the key questions heading into the second quarter – not just for Activision Blizzard, but for all internet companies as a whole – is can the increased user engagement be sustained? We’ve seen some companies, like Snap (SNAP) and Netflix (NFLX), already comment that their earlier user strength was a pull-in from future quarters and that they’d expect growth to moderate over the next few quarters. What separates Activision Blizzard from these names, however, is the fact that the company has a huge launch coming up in the Fall to continue to lure in users – a new Call of Duty release, where in-game bookings in Q2 were quintuple that from the prior-year Q2. This sets the stage for a very strong launch cycle where Activision Blizzard can both retain its more engaged user base plus encourage a higher level of in-game spend.

Nikolas Sismanis at Seeking Alpha concludes that despite the risk of over saturation and workspace disruption amidst COVID-19, ATVI is still a great buy – despite it trading at all time highs.

The company’s Q2 results make a good statement in terms of its capability to deliver excellent sales, develop successful titles while retaining its unbelievable net income margins. We believe that it may take a while before ATVI delivers another warzone-like title, hence we have significantly decelerated its future EPS growth estimates. Still, the stock comes out capable of delivering double-digit returns, even with its current price trading near all-time high levels.

We appreciate the potential risks in the gaming sector, and therefore we recommend that investors are cautious with the stock. Still, we recognize the attractiveness of the company’s diversified portfolio of cash-cow titles and rate the stock a Buy at its current price levels.