IN RECENT YEARS, THE SPACE TRAVEL OF CONGLOMERATES FROM ALL OVER THE WORLD, FAMOUS FOR THEIR RECORDS, HAS BEEN SUCCESSFUL, ATTRACTING INTEREST. AFTER THE LOSS OF THE FIRST SPACE TRAVEL TAPE BY THE PRESIDENT OF THE VIRGEN GROUP IN THE UK, THE FORMER CEO OF AMAZON, THE WORLD’S LARGEST INTERNET SHOPPING CENTER, IS ALSO PREPARING FOR A SOON SPACE TRAVEL. THE CEO OF TESLA, THE FOUNDER OF SPACEX, ALSO PROFESSED TO FOLLOW THE SPACE TRAVELS NOT FAR.

climb into the stratosphere to observe earth and space

It is a mistake to think of it as a hot air balloon, which is often seen on television. AS IT IS A JOURNEY TO THE STRATOSPHERE, THE CAPSULES FOR THE TEAM AND THE TRAVELERS WILL BE MADE WITH THE BEST MATERIALS THAT EXIST.

The polyethylene balloons are filled with hydrogen and the capsules are made of special materials that can withstand as much pressure as they need to keep travelers safe in outer space. Named Spaceship Neptune, the hot air balloon is developed by Space Perspective, a US space travel startup.

The company is a startup that has already gained prominence through the World View project even before its hot air balloon project started. WorldView is a project that connects sensors to balloons fired into the stratosphere to take real-time photographs of space and Earth. 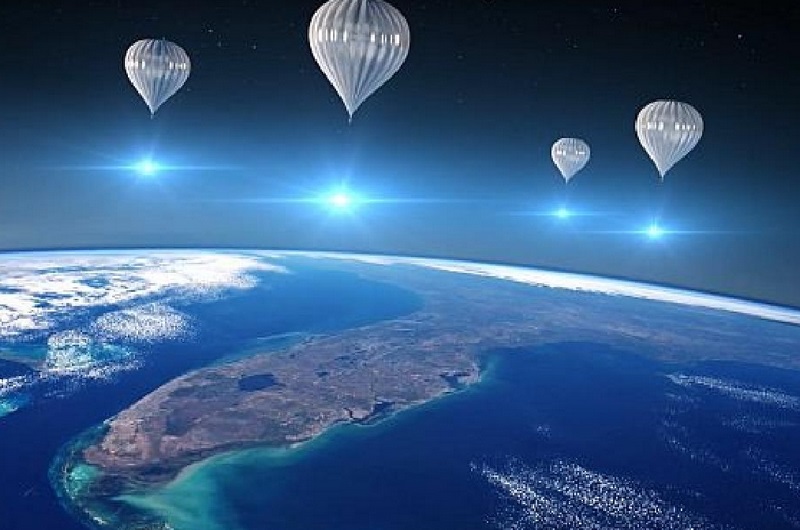 The balloons and capsules that make up the Neptune spacecraft are the same shape compared to conventional hot air balloons, but differ significantly in size and material. First of all, the balloons are so massive that they reach 100 meters in length.

Capsules are also much larger and more elaborate than normal hot air balloon boarding seats. The developer explains that the stratosphere, which carries eight passengers and a pilot, must run at a speed of 19 kilometers per hour, so it is designed to be almost similar to a spaceship.

Once the balloons and capsules are built, the hot air balloon will rise 30 kilometers above the ground. the height of the stratosphere is about 2 hours, and travelers can stay for about 2 hours and explore the earth and space simultaneously through a window. It is expected to take a total of six hours to return to the site when the tour is complete.

Interestingly, the startup started booking a trip in a situation where the Neptune spacecraft hadn’t even been manufactured in real life yet. the cost is $ 125,000 per person, which is difficult for citizens to use, but if marketing is done, the price is expected to be significantly lower.

Comfortable space travel that makes up for the inconvenience of rocket use.

spacepuspective is confident that you can travel through space in a hot air balloon because you have already gained experience and information that has been safely returned to the stratosphere using unmanned hot air balloons seven years ago.

The reason the startup uses a non-common-sense tool called hot air balloons, rather than the basic way of using rockets to move into space, is that the way rockets are used is very complicated and inconvenient.

Let’s say you use a rocket to travel in space. Aside from the fact that very few people can ride rockets at a time, they must undergo separate adaptive training to adapt to a different space environment than Earth.

Above all, it must overcome the enormous pressure rockets exert when they rise above Earth’s gravity. that is, the elderly who want to travel into space have no choice but to give up, because only a healthy person can board.

Hot air balloon space travel has the advantage of being able to activate space travel even more as it solves all the problems that can arise when using these rockets. Even if you are in poor physical condition or older, you can easily reach the stratosphere as if you were riding a vehicle.

In particular, hot air balloon space travel is expected to capture the hearts of travelers who are reluctant to travel in space because they do not need a separate spacesuit and can board while wearing it.

On the other hand, the advantage of hot air balloon space travel is that they can communicate with the ground after reaching the target point. The developer also claimed that weddings are possible in capsules, and if commercialization takes place, wedding scenes in the space are expected to be seen on the ground.

SpacePuspective, a developer, said it plans to transport people and fly in 2023, two years later. In response, co-founder Jane Poytner, Chairman of the Board of Directors, said: “Space travel at an altitude of 30 kilometers is likely to be a completely different view than Earth seen through conventional spacecraft or space stations.” .