Battlefield has always been the biggest and loudest multiplayer experience out there. It’s the Texas video game equivalent, and its bombast cannot be overstated. Battlefield 2042 offers a variety of ways to participate in simulated warfare in the near future. Whether you prefer to fight by land or air, you can experience dizzying onscreen explosions, tense firefights, and more vehicles than your teammates who know how to drive them. Unfortunately, Battlefield 2042 is packed with almost as many bugs as bad pilots, resulting in an otherwise solid online shooter.

At the very least, Battlefield 2042 is familiar. It continues the series’ trend of offering multiplayer maps with as many players as possible and a range of reliable character archetypes that have become the norm in first-person shooters. The latest addition to Battlefield’s long-standing formula is a weather system that lets you ride deadly tornadoes alongside vehicles and debris they pick up on their route on the map. These storms are a neat touch and add a sense of panic to already tense battles, but their inclusion seems unimportant in the grand scheme. 128-player matches and big maps guarantee dramatic moments, but there’s a thin line between spectacle and chaos, and 2042 often devolves upon the latter.

There has never been a Battlefield game released without Conquest, the signature mode that tasks two opposing teams to capture and defend objective areas on the map. Each side has a limited number of reinforcements that drain slowly depending on the number of sectors controlled by the team. The popular format is alive and well in 2042, but unfortunately it’s my least favorite way to play. For the first time, Battlefield is hosting too much players in every game. Without the presence of commanders to take charge of the assaults, Conquest sometimes feels disorganized and inconsistent as there is no good way for the 64 players on each team to communicate and focus their attacks. Additionally, respawns frequently put you in the middle of a contested area to be immediately killed by an enemy offscreen.

Even though the larger image is blurry at times, the moment-to-moment play loop is fun. The shooter is solid though the shots don’t always seem to register when they should, and the wide array of vehicles are just as fun to drive when running on foot gets tedious. I was disappointed with the lack of naval warfare, which is notable given its importance in the series and the fact that several maps are surrounded by large bodies of water.

Breakthrough is the second mode in the game’s multiplayer sequel, and it provides more focused engagements by splitting the maps into multiple segments, each containing two checkpoints. If the attacking team succeeds in capturing all the objectives in one area, they can force the defending team to retreat to the next area. While Breakthrough is still enoughWith a bloated number of players, this is without a doubt the best way to participate in a traditional Battlefield experience.

Hazard Zone, a brand new multiplayer format introduced in 2042, pits eight squads of four against each other and tasks them with recovering data disks from satellite crash sites scattered across the map. Each location is guarded by opposing AI forces that attack your team on sight. Hazard Zone has no respawns unless your teammates have a Redeploy Uplink. The only way to win these matches is to extract a hotly contested Helicarrier, which only visits the map twice throughout the match. If you miss the flight or die before boarding, the game is over and you lose the credits you spent in the pre-match ammo store. However, if you manage to mine you are rewarded with Dark Market Credits, a metocurrency that lingers between games, which you can spend to purchase better gear before your next match. The danger zone is tense and strategic, and the firefights at the end of each game make this my favorite way to play Battlefield 2042.

Another new addition to the series is Battlefield Portal, a community platform that players can use to create custom games or play out the weird creations of others. For example, there is an all rocket-only free mode where the only way to reload your launcher is to jump five times. Watching rockets fly across the screen in such a ridiculous storyline is hilarious, but like most games in Portal, the fun wears off after a match or two. 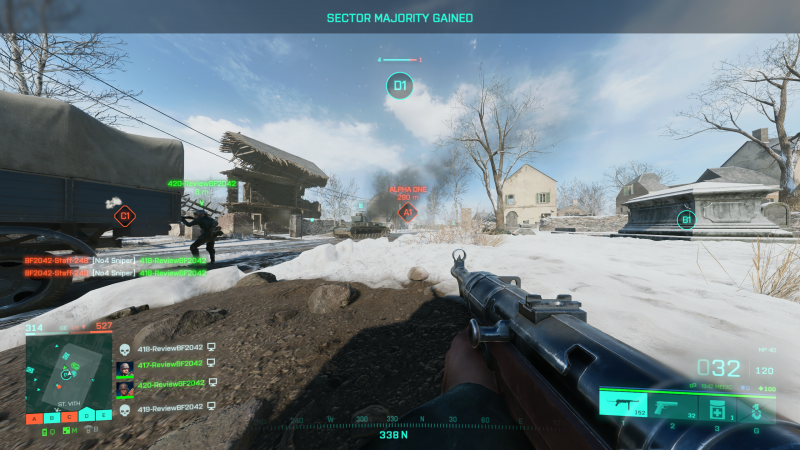 In theory, Portal is an opportunity for players to create inventive spins on Battlefield, especially since the Battlefield Builder is easy to learn and accessible. via an internet browser. Portal allows you to customize game mode, map rotation, arsenal restrictions and you can program advanced rule sets with visual scripts in the logic editor; however, the latter is less accessible to beginners. As a fan of old creative sequels like Halo Forge and Fortnite Creative, I don’t have to interact with Portal tools as they are designed to modify existing game settings and do not allow you to design your own original levels. .

Portal also includes remastered versions of classic maps, and you can augment their rule sets or play them in their original form in a playlist offered by the developers. I love this inclusion and am very happy to have a convenient way to return to beloved places like Valparaiso, the Caspian border or the Battle of the Bulge. These are indeed remastered versions of the best cards in the series, and I’m interested to see which ones DICE adds next.

Whether you’re battling above the competition like Spider-Man, flying over a deadly tornado in a wingsuit, or pulling enemies behind moving barricades, each Battlefield Specialist offers a unique way to participate in battle. The title was launched with ten Specialists, and each of them belongs to one of four classes: Assault, Engineer, Support, and Reconnaissance. You can fine tune these characters in multiple ways (including being able to use any weapon). Still, my favorite customization feature is the ability to swap weapon attachments in the middle of combat without needing to respawn. My favorite sniper lens is the 6X scope, but I’ve found it handy to switch to a different optic on the fly with the push of a button. This new feature dramatically improves the multiplayer experience and should be adopted by other first person shooters.

Battlefield 2042 includes seven maps at launch. Hourglass features a remote town reclaimed from the nearby desert, Discarded is home to colossal shipyards along India’s western coasts, and Breakaway is nestled amid the icy mountains of Antarctica. The other cards – Manifest, Kaleidoscope, Orbital, and Renewal – are standard fares but still feature landscapes to explore. Each map is affected by severe weather systems which are exciting to navigate, but I wish more maps were home to unique elements like Orbital’s rocket launch and Breakaway’s explosive silos that continuously increase the map mid-game . Anyway, there are no bad cards and I like to play on all of them.

Unfortunately, Battlefield 2042 currently feels undercooked due to an abundance of bugs. While most of the bugs I have encountered are minor, each dilutes the fun I have while playing. For example, the grappling hook zipline passes through the front of the device while it is animated or cannot summon air support on a map like Hourglass due to an issue with the sand mesh. More serious issues can negatively affect gameplay, such as when sniper scopes lose magnification after interacting with gadgets like Irish’s moving barricades. While playing on PC, the game also crashed hard on my desktop once in a week of playing the game. A friend of mine was not so lucky and suffered several crashes during one of the games. our gaming sessions. These accidents have particularly disadvantaged me in Hazard Zone.

Make no mistake: Battlefield 2042 is playable, rich in content, and often a lot of fun. The title’s seven maps are distinct from each other, its multitude of customization options make it easy to play the game you want, and I love the extreme weather systems and the quick weapon feature. The portal hasn’t reached its full potential, but it does present a convenient way to access six beloved experiences from Battlefield 3, Battlefield 1942, and Bad Company 2. Battlefield 2042 is an easy recommendation for fans or existing players looking for a modern war game, but I’m having a hard time approving it fully due to its current lack of finish. As long as DICE continues to release patches and fixes, Battlefield 2042 could eventually become a go-to online shooter, but it’s a shame it came out like this.

Battlefield 2042 has been reviewed on PC with code provided by the publisher for testing purposes.