Gearbox just wrapped up The Borderlands Show, which included reveals of a whole host of new content coming to Borderlands 3 as part of Season Pass 2. The first big chunk of the new Season Pass, the Designer’s Cut add-on, arrives in the FPS game November 10, and now we have a clearer picture of what we’ll be seeing when it shows up.

The new Arms Race mode is what Gearbox is calling “a roguelike experience,” meant to be fast-paced and unpredictable thanks to its randomised elements. You’re dropped into an all-new zone without any of your existing gear, passives, or active abilities, and you’ll have to scrounge for weapons and items in order to survive. The new zone is called the Stormblind Complex, and it’s an old decommissioned DAHL military base on Pandora.

The goal is to make it to the extraction point before the clock runs out and you’re swallowed by the encroaching storm, but a few things stand in your way. The first thing is your lack of weapons, which you can fix by looting containers and enemies. The second is Heavyweight Harker, the mode’s final boss. You’ll have to take Harker down to win, and if you die without a teammate around to revive you, your run is over.

Gearbox says Arms Race is a way to make every loot drop feel meaningful – something that tends not to be the case as you progress through the Borderlands 3 main campaign. Eventually, everyone just stops bothering to pick up green guns, right? In Arms Race, you’ll need each piece of equipment you find.

Arms Race also evens the playing field – Vault Hunters of any level can play together, because their skills and gear have all been set back to zero. 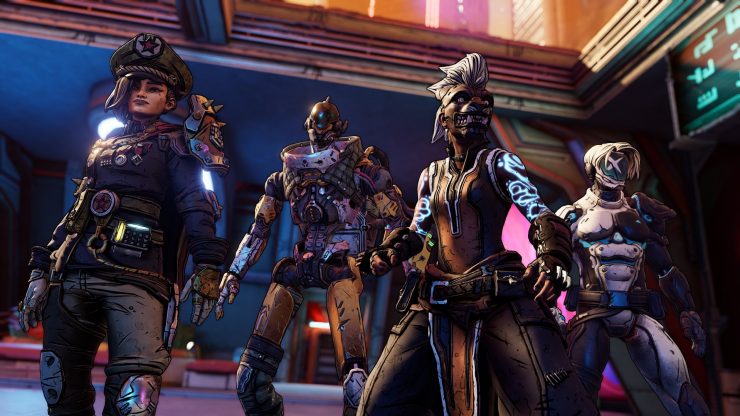 The Borderlands Show also revealed all-new ‘Final Form’ models for each of Borderlands 3’s four Vault Hunters. These looks are all meant to showcase how each of the characters might have turned out if they hadn’t decided to pursue their careers in ancient vault spelunking. Each can be mixed and matched with other cosmetics you’ve unlocked for the characters, so you don’t have to use the whole outfit if you don’t want.

The Multiverse Final Form cosmetics packs are going to be available as part of Season Pass 2, but they’ll also be included in the new Borderlands 3 Ultimate Edition.