Rock Band developer Harmonix is writing an all-new love letter to creativity and music with its upcoming rhythm game, Fuser. The concept evolves the music and rhythm genre to build an open-ended experience. As a DJ playing shows in front of massive crowds, you need to mix tracks from a variety of popular songs to create your own unique sound. This is a big departure from past music games where you had to match a preset music pattern. But it turns out that becoming a professional DJ can be quite difficult for rhythmically challenged people like me.

Harmonix fans might pick up on how Fuser combines some of the aesthetics of Rock Band with the feel of the trading card/board game DropMix. Players load up their music crates with up to 24 songs composed of multiple artists, genres, and styles. Then they mix four different instrument tracks to create new songs. For instance, you can combine the drums from a pop song with a hip hop bass or synth, a rock guitar, and the vocals of a country song. 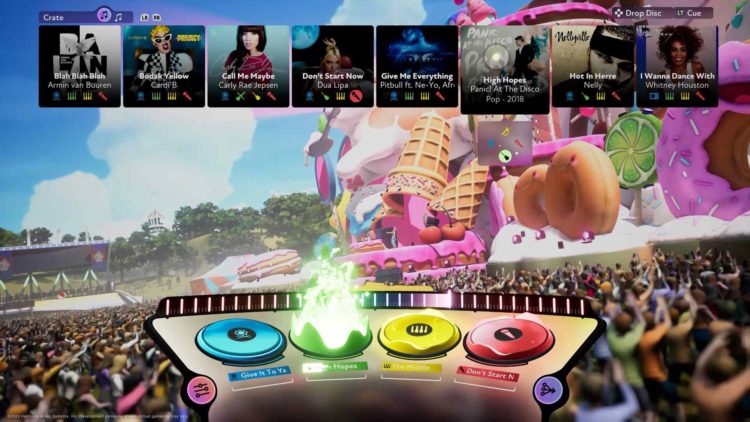 Proving that hip hop, country, and rock can play well together.

It’s almost shocking how many songs from diverse artists work together. You might not think that the poppy violins from “Call Me Maybe” would work with the drumbeat from “bad guy,” the lead guitar of “Don’t Fear the Reaper,” and the vocals from “Sucker,” but they somehow do. Songs are lined up across the top of the screen and you can switch between groups of eight by hitting the W and E buttons. Once you’ve decided on a song, you can use the mouse or gamepad to tap on their instrument icons to add them to your mix.  Alternatively, instruments are mapped to your keyboard, so you can hover the mouse pointer over a song and hit A, S, D, or F to add them to their respective slots on your DJ board.

Although the audience will request tracks from specific genres, it isn’t necessarily interested in how well your eclectic music choices sound. Instead, the focus is mainly on timing. The crowd’s happiness, measured by a mood-based health bar, grows when challenges are met and when there’s a good amount of variety. Some audiences may quickly grow bored if you leave discs on for too long. Other crowds may feel overwhelmed if you keep changing instruments in rapid succession. Part of the challenge is in getting a feel for what they want and catering to it. The other major part of the game is in dropping discs on the downbeat to keep in time with the music. That’s about when Fuser transforms into an extreme exercise in multitasking.

Feel the rhythm with Harmonix

Playing for the first time can be overwhelming, especially if you’re not entirely familiar with all the provided songs. You have to balance among mixing your music, meeting the crowd goals, and fulfilling goals given to you by the concert promoter. Using the synth board to record custom loops that can be inserted into the mix during my performance while trying to remember how long my tracks have been playing completely broke me during my first few tries. Fortunately, Fuser is pretty easygoing and doesn’t punish you for not getting the hang of things right away. 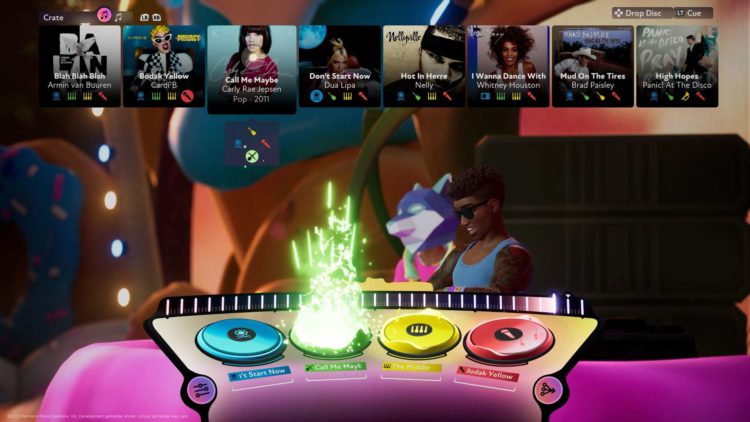 Things do tend to spin out of control at first.

Those who have trouble listening for the downbeat can use the handy beat counter just above the mixing board, complete with colored indicators for the best time to drop specific instruments in. But even with the counter, I had a lot of trouble getting a feel for exactly when to drop a disc. I was almost always a fraction of a second too late or early for the crowd’s taste. I ended up getting low scores and outright failing several shows before I finally got the hang of both listening for the downbeat and using the counter at the same time.

There are tools to help streamline the action, such as adding alternate discs so that you can switch between two songs with a quick click. Players can also take song customization to a new level by toying with the volume of each instrument. That’s probably more of an extra feature, since it doesn’t seem like the crowd cares much for your musical ability as long as you keep up the variation and switch out instruments in perfect time with the downbeat.

My problem was that I became a bit of a music perfectionist and sought to put together mixes that I thought would sound amazing. However, putting together a varied performance in front of a judgmental crowd didn’t leave a lot of time to fool around and listen to the creations I put together. Sometimes, I grew so engrossed by how I wanted a mix to sound that I left the same four discs on for too long and lost points.

So, the best way to succeed in Fuser is to take full advantage of Freestyle mode to really know the songs that are available in your library. You should also personally assemble and organize your crate instead of letting the computer auto-loader do it. Then have a general plan for how you’re going to play them.

Being the best version of yourself

Instead of following the familiar “rise to fame” formula in Rock Band, Fuser’s campaign focuses more on putting together progressively more difficult music shows during a music festival during times of the day or night. Sometimes you’ll be the opening act tasked with warming up the crowd. At later shows, you’ll step out onto the stage as the night’s main event. 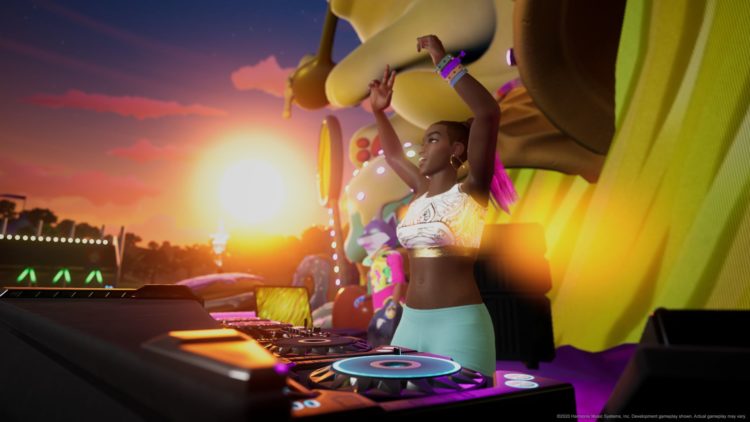 Fuser will include a robust and open avatar customization system.

Progressing through the campaign earns XP and tokens for purchasing new songs and cosmetic items. The character customization system is similar to that of Rock Band 3 in that there are many body types, attributes that are unbound by gender, a huge collection of clothing, and decorations such as large head pieces to completely shape the character that best represents your personality.

You also get to customize the stage with different lighting effects, pyrotechnics, holograms, and more to help ramp up the energy during your performance. The final campaign will no doubt ease players into the different elements more smoothly than the demo I played, but I was glad to experience the incredible challenge of trying to keep so many plates spinning at once. 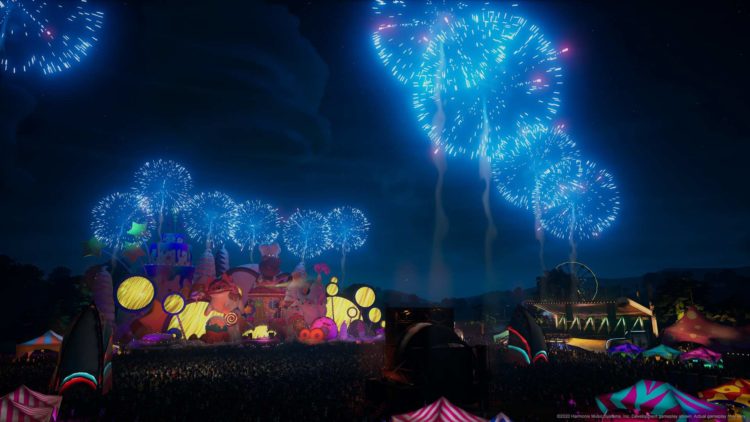 Enhance your performance with lights, pyrotechnics, and more to completely bring your show over the top.

Fuser releases this fall on the Xbox One, PlayStation 4, Nintendo Switch, and Windows PC with over 100 songs.  Preordering the game gets you the three bonus DLC songs “New Rules” by Dua Lipa, “Young Dumb & Broke” by Khalid, and “Mr. Brightside” by The Killers. The VIP Edition includes the first 25 DLC songs alongside a load of items for your avatar and the stage.