From the moment Kena’s staff ignites with magnificent magic, the world around her sizzles with excitement, creating an enchanting atmosphere for one of the best adventure games I’ve played in recent memory. Kena: Bridge of Spirits is Ember Lab’s debut game, but it hits with the sophistication and beauty you’d expect from a studio that’s been doing this for decades.

With environmental puzzles around almost every bend and secrets waiting for those who can solve them, Bridge of Spirits has a strong heart for adventuring. That heart constantly pounds as new areas are discovered, each beat pulling you in different directions to unearth hidden treasures and items that will help rejuvenate a fallen society. 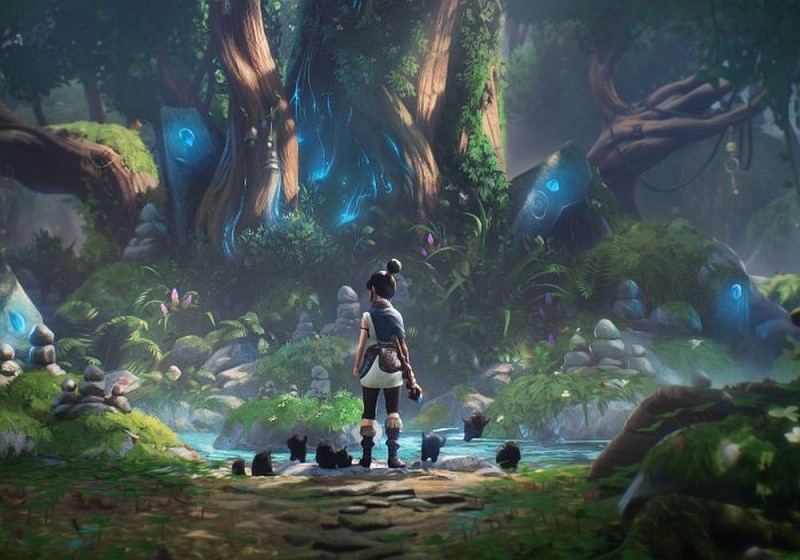 Kena (pronounced “Kay-nuh”) is an inexperienced Spirit Guide who must locate wayward souls that are reluctant to leave this mortal coil. Before sending them on their way, she needs to learn about their lives, and ultimately what happened to them. By exploring the land, their pasts are unearthed, and you learn of their triumphs and hardships through brief flashbacks that make the story sing in intriguing ways and help flesh out its key players. Many of these revelations play out within beautifully animated story sequences that swell with emotion and are amplified by an outstanding soundtrack featuring traditional Balinese music. I found myself humming along to the excellently composed low-key melodies, some sung by Ayu Larassanti, the same actress that brings Kena’s voice to life. How cool is that?

The serenity of the experience extends to the world. Be prepared to enter photo mode numerous times during your playthrough. Bridge of Spirits is as beautiful as games come, and that beauty encourages exploration – you’ll want to see all of this fantasy kingdom. Ember Lab’s artists make every little detail pop, whether within the sprawling forest Kena journeys through or the little creatures she meets along the way. These adorable tiny blobs are called Rot and are one of the game’s most sought-after collectibles. They play a massive role in both the gameplay and story, but more importantly, they wear cute hats (another item to track down). You don’t know what the Rot are or why they are helping Kena, but you keep gathering them (up to 100 in total) and hope they continue to be your allies as the story unfurls.

As Kena bounds through the sun-soaked forest, she’ll come across areas of corruption littered with thorns, muck, and gray vines leading up a red, pulsating blob called a Tangled Heart. When Kena enters these locations, enemies materialize from red mist and combat ensues. Throughout the entire game, Kena only uses her staff to take down these foes, but this simple weapon is about as adaptable as they come.

Kena’s movements are swift, and the staff’s melee strikes land with a satisfying wallop. She can evasive roll, block, and perform parry’s to stun her adversaries. These battle sequences hum with intensity, are loads of fun, and expand with complexity when Kena learns to use the staff in new ways.

Some of the staff’s augmentations unlock through purchase, but the most significant additions are earned by making progress in the story. Along the way, Kena learns how to turn her staff into a bow and channel its powerful energy to create bombs. Tagging an enemy with a carefully placed bomb is good fun, but the bow is the true star of combat. It feels incredible and is designed with pinpoint precision in mind. When Kena leaps into the air and pulls back the bowstring, time slows, allowing for an arrow to hit the exact spot you want – whether it’s a small weak zone on an enemy’s chest or a hanging lantern below a galloping behemoth. Landing these shots is an empowering experience, and you are tasked to do it constantly. It’s such a satisfying gameplay hook.

The Rot, those adorable companions I mentioned earlier, also play a significant role in combat. They can heal Kena, stun enemies, and are game-changers against bosses. These conflicts turn the difficulty to 11 and demand near perfection in your timing and strategies. Don’t be surprised if these bosses throw you around like a ragdoll, and you die often. The leap in difficulty is surprising and is one of the areas where the game struggles a bit. The difficulty setting is switchable at any point, but with unsatisfying results – moving from blistering intensity to cakewalk.

Bridge of Spirits also leans a little too heavily on the same puzzle mechanics, especially in the late game where almost every vertical movement pushes Kena to throw a bomb and detonate it with an arrow to create a path forward. While I appreciate how clever the puzzles are and how fluid the platforming is, using the same motions gets tiring and saps some of the fun out of the exploration.

Ember Lab was upfront about Kena’s length going into release, saying it could be completed in a weekend. Given how much I adore this experience, I wish it would last longer, but the shorter footprint works well, especially for seeing all the world has to offer. The final act is the only aspect that feels rushed. The story wraps up nicely (in ways I didn’t expect), but a few of the big reveals and conflicts come and go in a flash and aren’t given the same level of care as other moments in the game.

Bridge of Spirits stumbles a little in spots, yet confidently sprints into the heart of the adventure, rewarding the player with secrets galore and visuals that are almost always worth admiring. If you love Zelda-like games or are just looking for an experience that will make you smile every step of the way, you can’t go wrong with Kena: Bridge of Spirits.

Dying Light 2 May Have Just Confirmed They’re In Trouble

The Opening Hours Of New World Are Incredible