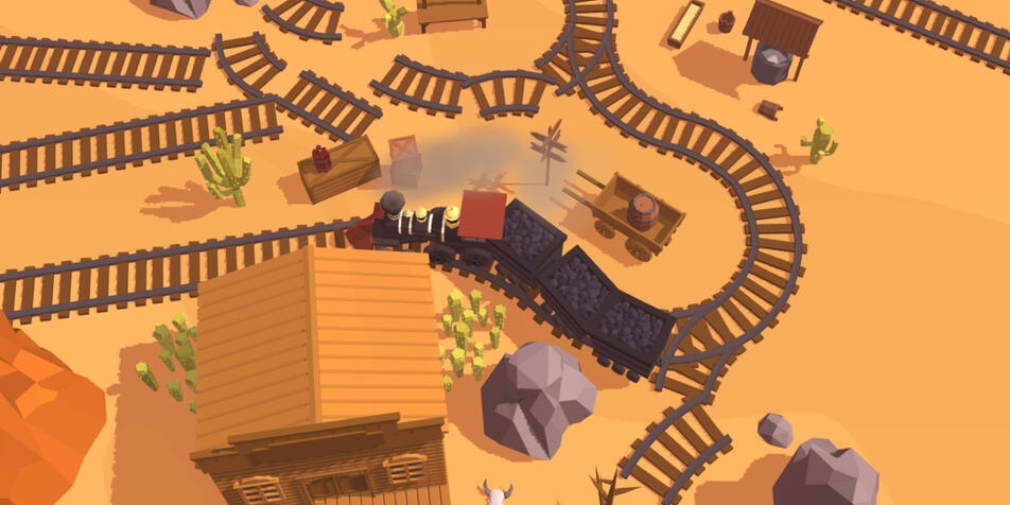 Railway Canyon is the latest puzzle game from Tepes Ovidiu – also known as Crevasse Studio – who you may know from their previous titles such as Vestigium, Cessabit and Halfway. His latest effort is available now for iOS as a premium game.

Ovidiu often makes puzzle games where the intention is for them to be laid back experiences and this one is no different, even though it sounds quite hectic. In Railway Canyon, you’ll be tasked with aiding a train in its bid to escape a group of bandits who are trying to hijack the locomotive to steal its cargo.

To do this you’ll have to fix the broken railway before the train begins its journey to ensure that it’ll be able to safely speed away from the wannabe thieves. This is achieved by tapping the scattered pieces of the track so that they rotate in the appropriate direction, so it looks to be incredibly simple to control.

There are 32 levels for players to make their way through, which each presumably consisting of more pieces of track to form into one coherent line. Ovidiu is, as always, keen to point out that there’s no violence in this game and it can be enjoyed at the player’s preferred pace.

It certainly looks very nice, particularly if you’re into the Wild West aesthetic. The background music is intended to be calming, which certainly suits the autumnal colour scheme you often get with Wild West themed games. It will also add a bunch of stickers for players to use in iMessage if you’re into that sort of thing.

Railway Canyon is available now over on the App Store. It’s a premium title that costs $1.99.

Looking for other great puzzle games to play on your phone? Here are 25 of the best available for iPhone and iPad