In a typical open-world game, the environment is littered with content, populated with interesting side-quests, and full of breathtaking sights, but an overarching singular objective remains. Whatever the quest, exploring the world and helping locals often requires that you step away from your primary purpose. Sable is refreshing in that regard. This expedition allowed me to lose myself in the small details, talk with diverse characters, enjoy the experience, and admire the sights.

My trek into the desert is a rite of passage called the Gliding, during which I must leave my clan to roam the world gathering masks. I can return to my home when I feel like I have traveled enough and pick a mask to represent my adult identity.  Though they lack voices, Sable’s characters have no absence of personality. As the motherly Jadi urges me to take time appreciating the trip, her concern makes leaving the clan bittersweet. 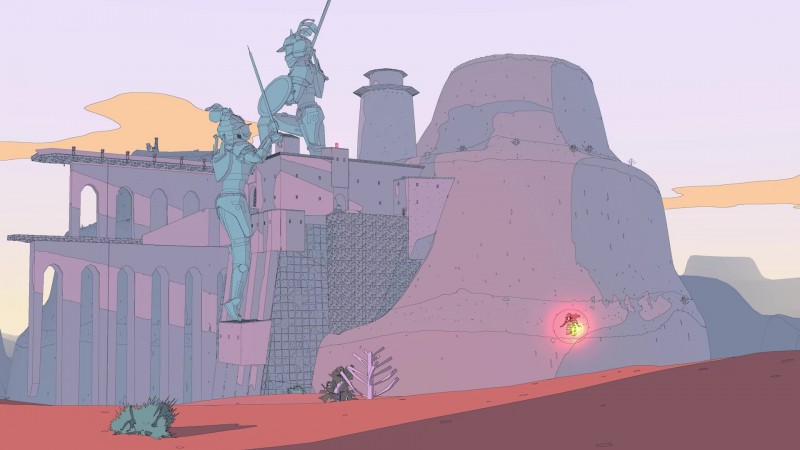 When I leave, my first foray into the larger world is extraordinarily compelling. An immense, trackless landscape opens before me as a celebratory Japanese Breakfast song rings out. The moment skillfully replicates the thrill and trepidation Sable feels thanks to her newfound independence. Fortunately, the clever level design keeps players from wandering aimlessly by putting important locations in hard-to-miss spots, and soon I’m ready to hunt down masks.

To collect most masks, you bring three badges to a mysterious mask-crafting entity. The missions that reward these tokens are usually short, and in some cases, simple fetch quests. On the hunt for Hercules Beetle Mask badges, for example, one assignment leads me to scare the literal crap out of bugs – apparently, it makes excellent fertilizer. In a slightly loftier Guard’s Mask quest, I received a badge for climbing the evocatively named Bridge of the Betrayed, meeting a character examining their own identity. While neither mission is mechanically complex, I appreciate the narrative variety and how the quests inspire me to travel to the ends of the map. As someone who excitedly pursues side content in most games, Sable’s exploration-focused, combat-less gameplay is fantastic. 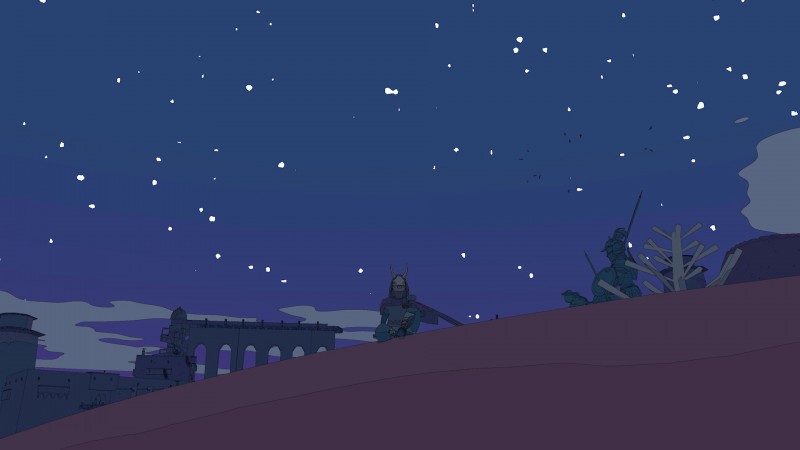 Of course, it doesn’t hurt that my travels took me through an absolutely stunning environment. The art is almost simple, but its vibrancy is astounding. Some may be thrown off by the main character’s sprinting, which intentionally runs at 12fps while the rest of the world targets 60fps. However, I appreciated this contrast because it accentuates the animation, like a painting that emphasizes its brush strokes. There is so much life in Sable’s visuals. The sand glows under the sunrise, and the stars shine when all the desert’s colors fade into the night. The landscape is rife with structures to climb, and these tempting locations often hide valuables, whether a unique article of clothing, a useful stamina-boosting collectible, or an unexpected character interaction. My curiosity was constantly rewarded.

Sable’s exploration remains engrossing thanks to its smooth, stamina-dependent climbing, which let me navigate simple, environmental puzzles – like connecting a power supply to open doors in a long-abandoned spacecraft. The gliding stone artifact encases Sable in a protective bubble that allows her to float slowly towards the ground – shielding her from fall damage. This mechanic dared me to scale great heights. Whether summiting an obstacle or gliding in the breeze, the act of exploration was entertaining.

My favorite mode of transportation is unquestionably the hoverbike. While zipping across the game’s parched expanse on the customizable, futuristic vehicle, I could almost feel the wind in my hair. Many settlements have vendors that sell unique parts, which I could mix and match to make the bike my own. The scene where I worked with my clan’s machinist to assemble my speeder did an excellent job of revealing how the culture respects technology to an almost spiritual level while not overwhelming me with exposition. This introduction built a bond between my bike and me, which helped me forgive the repeated times the speeder failed to come at my call because the AI couldn’t navigate various barriers. Most of the time, I remedied this problem by fast-traveling to an already discovered, nearby location, which would teleport both me and my machine to the same place. It’s a bit inconvenient but never took more than a few seconds away from the action.

Sable ends in the same way it starts, at home with family. The narrative payoff is not actually about your final choice, and that may rub more goal-oriented players the wrong way. However, I found the conclusion a fitting end to a side quest-filled exploration game. For those who love to explore, I can’t recommend Sable enough. Every element – beautiful graphics, compelling traversal, and player-driven plot – works together to ensure I simply lose myself in the world.

We Shouldn’t Be Worried About God Of War Ragnarok

The Life And Career Of Ikumi Nakamura