Tilting Point and Wicked Realm Games’ Star Trek Timelines is celebrating its fifth anniversary this week on the iOS and Google Play stores, and the latest update introduced a slew of new content.

For starters, there’s a new limited-time event “A Woman of Conviction”, where you can join Sirella in taking down the parasitic beings controlling her husband, Klingon warrior Martok, and other senior Klingon officials. By targeting the ship carrying Martok and Lieutenant Commander Remmick, you must eliminate the parasitic mother to stop the invasion before the event ends. This new content will be available from next week, January 21.

By February 2, logging in to the game will also reward you with Captain Tom Paris, a free 5-star Luau Paris crew member. You’ll also be able to earn a copy of the Pineapple Paris crew member by completing three temporary achievements that will remain active for the duration of the event. Additionally, until January 19, all four Crew and Star Crew pulled in the 1x and 10x Time Portal will become Looks, giving you the ability to choose from multiple Crew members with each pull.

If you’ve never played Star Trek Timelines before, it’s a strategy game that features characters, ships, and locations from the Star Trek series, including the first ten movies and all seven TV series, including the most recent Star Trek: Picard. That’s over 900 characters to interact with in the game, allowing you to build a dream squad featuring iconic characters from all eras of the series as they take part in missions and battles. 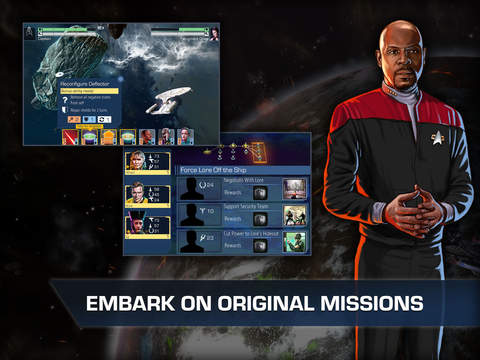 If you want to play Star Trek Timelines, download it now from the iOS App Store or Google Play for Android. This is a free title that contains in-app purchases.

Check out our list of the best strategy games you can play on iOS.