To help make Elden Ring a little less daunting for new players who aren’t fans of the Dark Souls difficulty level, the open-world game introduces summons; spirits of fallen souls that you can conjure to help you in combat.

These spirits appear in many forms, from skeletal warriors and deadly plants to creatures like wolves, serpents, and winged monsters. They can be the difference between life and death, and there are a lot of them, so naturally there are some that are better than others. Sadly, it’s not as simple as tapping a button to summon your spirit pal, you have to search and obtain the spirit ashes first.

It’s worth taking the time to find the best summon as they are a great distraction in boss fights, either taking damage or allowing you to get in a few extra hits. They can also be upgraded using Grave or Ghost Glovewort; plants found across the Lands Between. Here are the best spirit summons in Elden Ring, from early game spirits like the Jellyfish, to the overpowered Mimic Tear.

The best Elden Ring summons are:

This legendary summon is a tanky spirit that can be obtained fairly early on in your adventures. She swings and hurls a lance while blocking with a greatshield. This makes her a powerful spirit that can not only defend and distract, but who is also effective at both close and long-range combat.

Cost: 104 FP
Location: Her ashes can be found at the end of Tombsward Catacombs in Weeping Peninsula after defeating the boss, Cemetery Shade.

These are the first spirit animals you’re given once you unlock summons at the Church of Elleh. You can summon three wolves that attack quickly, and they make for a great distraction with both bosses and groups of enemies alike. You probably won’t stick with this summon as you progress to other areas and take on harder bosses, but they’re a fantastic option early on.

Cost: 55 FP
Location: Unlocked after receiving the Spirit Calling Bell by Renna at the Church of Elleh.

Hailed as the best summon in Elden Ring, Mimic Tear, er, mimics your current character, creating a clone of yourself with all your stats, weapons, and gear equipped. Depending on how your character’s built, Mimic Tear can dish out a lot of damage and can survive brutal attacks from Elden Ring bosses once upgraded. As this is a powerful summon, it’s not as easy to obtain and you first need to defeat the Mimic Tear before continuing on to find its ashes.

Cost: 50% HP
Location: The ashes can be found after you defeat the Mimic Tear boss in Nokron. Don’t forget, you can complete a large portion of Fia’s Elden Ring quest while in the area. Head to the Ancestral Woods Site of Grace and leap onto the ledge opposite and continue scaling the edge of the building until you reach Night’s Sacred Ground. Leap onto the rooftop with the spire and past the enemies; instead of jumping down, head over the broken wall and past the candlelit tomb to the door on your right. Here, you need a Stonesword Key to enter, make short work of the enemy inside and open the chest to get the ashes. 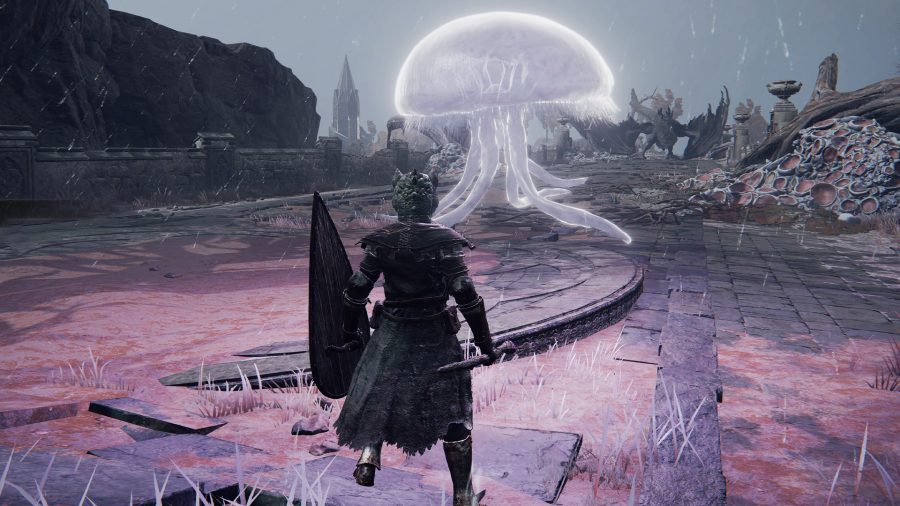 The Spirit Jellyfish is a giant jellyfish that spits poison and bashes enemies with its big, bloaty head. It’s a hardy enemy that works hard to either distract enemies for you to take a swing, or chips away when enemies are distracted. It takes a while to attack, but has a ton of health to stick around in the fight.

Cost: 31 FP
Location: This is a gift from Roderika who can be found at Stormhill Shack. If you finish her questline, you can also upgrade spirit ashes, as well as obtain the Jellyfish Spirit.

A dual-wielding knight that slices through enemies with two great longswords. Oleg is also quite speedy, and deals with enemies quickly, nipping from one enemy to the next with power and precision. Although not as tanky as other summons, Oleg can deal with swathes of enemies and is a great distraction in tough boss fights.

Cost: 100 FP
Location: Banished Knight Oleg summoning ashes can be found in Fringefolk Hero’s Grave, next to the Stranded Graveyard Site of Grace. You need to use two Stonesword Keys to enter and deal with the Ulcerated Tree Spirit boss at the end of the mini dungeon.

For those looking for an agile, deadlier spirit summon capable of evading enemy attacks and dealing lethal blows; Black Knife Tiche is an assassin that carries a black knife imbued with the Rune of Death.

Roberto Carlos loses patience during the show, tells the audience to shut up and receives criticism on social media: “I never understood fame”