Riot Games has stayed in its lane for a long time. Keeping to itself, building League of Legends with a dabble in Teamfight Tactics, the nonetheless vast and wealthy studio rarely bothered itself with the outside world – that was until last year.

Riot dipped a toe in the world of CCGs with Legends of Runeterra and announced a planned cannonball into the pool of competitive FPS with Project A – a code name for the game we now know as Valorant. Valorant is best described through games that existed before it. By mixing the competitive formula of Counter-Strike with the characters of Overwatch, Valorant is cribbing from two of the most successful games in this space. There was little doubt in my mind that the game was going to be at least good – and perhaps great.

Valorant is an FPS hero shooter, and like many top tier triple-A games these days, each hero you play commands different abilities, displays different personalities, and boasts a distinct visual style – in other words, they’re true characters. Each ‘agent’ has the same choice of guns as any other – an important distinction from Overwatch – but with extra smokes, grenades, or other tactical equipment that are unique to them.

These abilities are far more straightforward to learn than in Overwatch. Omen, Jett, Brimstone, Cypher, and Viper all have some form of smokes, for example orbs of wisps (or a circle of static for Cypher). Their colours, methods of distribution, and secondary effects may differ a little, but their primary function is the same: blocking enemy vision so that you can move more freely, perhaps setting up a flank or establishing control over an area. Other shared abilities include Phoenix and Viper being able to deploy smoke in a line, while Phoenix, Brimstone, and Viper all command similar abilities to spread damage over an area, like CS:GO’s molotovs. There are some truly unique abilities to each agent – ultimates being the best example – but it’ll take you a lot less time to get a feel for the general playing field in Valorant than in Rainbow Six: Siege, Overwatch, or even Amazon’s new contender, Crucible. 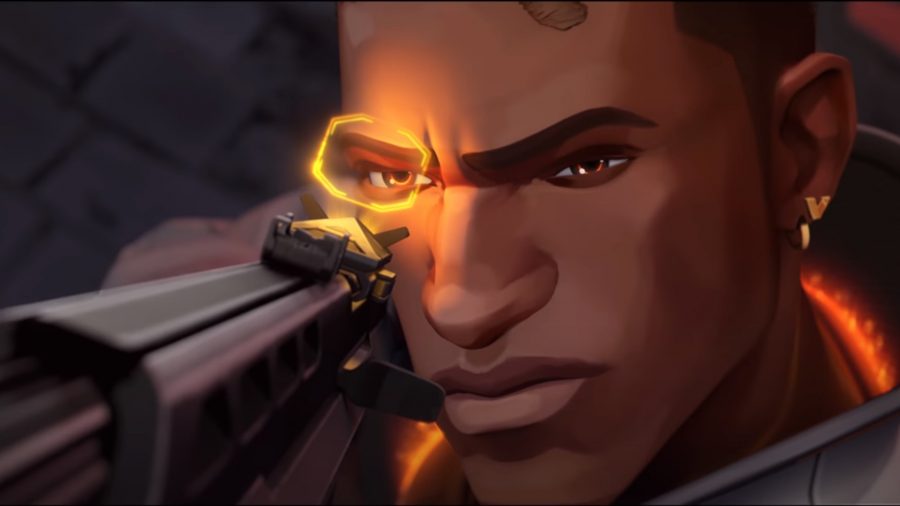 That said, it’s obvious that these agents owe Overwatch a large debt in their design. Riot really isn’t shy about admitting it when there’s a mechanic it likes: Hanzo’s sonar arrow, Mei’s ice wall, and edgy edge-lords with teleportation abilities like Reaper all find close equivalents in Valorant’s roster. I said as much in my Valorant gameplay preview, and it’s worth reiterating. I wouldn’t go as far as to say it’s a one-to-one rip-off, but very much ‘Can I copy your homework? I promise I’ll change it enough that the teacher won’t know.’ This might explain why, in Overwatch, I know and love the heroes I’m playing, while no such attachment has yet manifested itself in Valorant (although the new selection screen animations give them more personality than they had in the beta).

Riot’s other inspiration was, of course, Counter-Strike: Global Offensive. I admit I never got much into CS:GO – my FPS experience comes from elsewhere, and although at first I found Valorant’s pacing and mechanics frustrating, forgetting to check corners etc, I quickly grew to enjoy them. Valorant has a steep learning curve, but it’s also a short one – after the first few steps, all becomes clear. If you are familiar with CS:GO, I have it on good word that Valorant is a nice expansion on mechanics you already know. Character abilities, in particular, differentiate Valorant enough that you can enjoy it and CS:GO as separate entities.

Valorant has four maps currently in play, and with each, the developers explained to me that they’re aiming to ask a question or offer a unique element. For Split that’s the vertical ropes, for Haven it’s an extra bomb site, for Bind it’s teleporters, and for Ascent it’s windows and doors. These elements do change the field of play enough to deliver a fresh experience with each map, and Riot gets a pat on the back for this success. 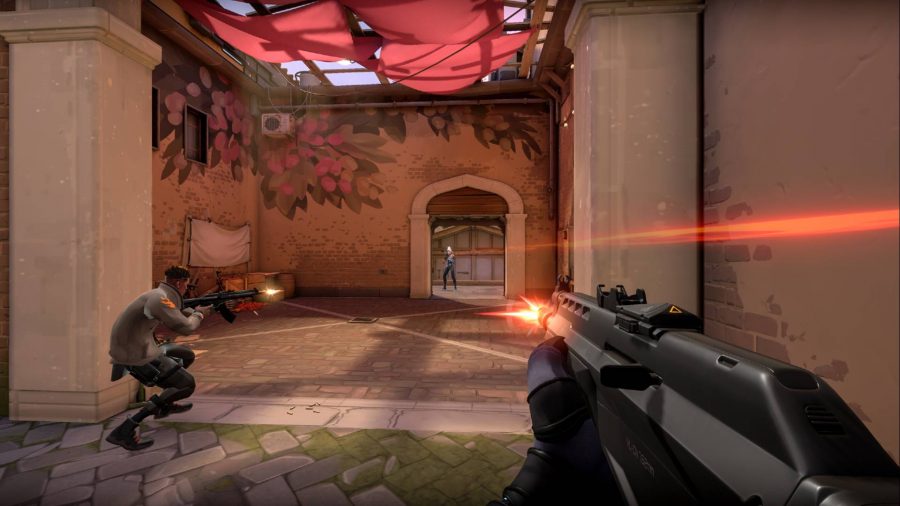 Riot gets a second pat on the back for the two modes in the full game. The beta contained only the standard CS:GO-inspired mode in which teams battle to place or defuse a ‘spike’ (a bomb) or eliminate the other team, with the first team to 13 wins taking the match. That’s quite a commitment – I’d say on average, matches last around 40 minutes. For the full release, however, Riot has added Spike Rush: everyone on the attacking team has a spike, everyone has the same gun and all their abilities (except their ultimate), and the map is adorned with orbs granting advantages like a better gun, a damage multiplier, and more. It’s quick, fun, and a great way to either warm up for the main event or simply to experience Valorant without stressing out.

if you want to look cool in Valorant, it’s going to cost you a lot of money

Unfortunately, if you want to look cool in Valorant, it’s going to cost you a lot of money. Free-to-play games typically sell cosmetics to make a profit, and this is the case with Valorant. Refreshingly, there are no ‘surprise mechanics’ involved – no gambling on opening a box to get the skin you want like Overwatch – but this does mean skins in Valorant cost a pretty penny. To buy a full collection of one skin type, such as the Sovereign collection, costs 7100 Valorant points – that’ll get you four gun skins, a knife skin, and a few extras. And the exchange rate? There are six points bundles available, from $4.99/£4.99 to $99.99/£99.99. In North America, the $34.99 package gets you 3,650 points, so you could grab two of those for the full collection, or splash a hundred bucks on the top-tier package for 11,000 points.

On top of that, when you obtain a skin, you can spend Radianite points (another currency) to get VFX effects and variations on skins. Perhaps you want your gun to reload in a cool way, or for opponents to die in a dazzle of flashing lights whenever you take them out. Radianite points can be bought using Valorant points, with the top-end bundle equating 80 Radianite points to 4,800 Valorant points. So in theory, if you want a Prime-skinned Vandal with all the trimmings, you could spend up to £59.98 on that one gun – that’s just one skin. 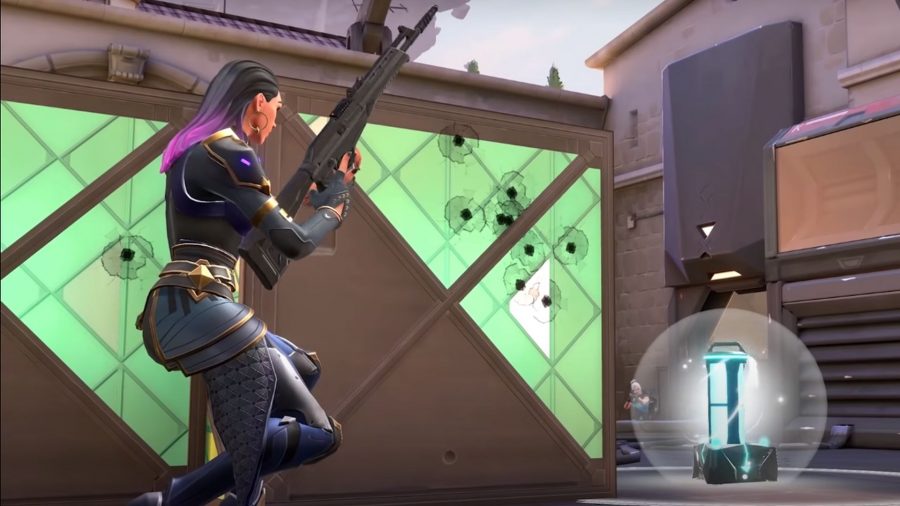 I must stress, these skins don’t affect gameplay whatsoever. They are just there to make you look badass and like you know what you’re doing in front of your new cool gamer friends. However it does show just how much money you can pump into Valorant – there will be, and already is, some pressure for people to purchase these skins. I guess it’s just a blessing people know what they’re paying for.

Valorant, on the whole, is a massive success

If you remember, Riot advertised Valorant in a rather unusual way. Where character personalities, scenic environments, or action-packed gameplay are the focal points of advertising campaigns for most games, Riot took a different approach. So much of its campaign positioned it as the solution to very particular problems of the competitive FPS niche: eliminating peeker’s advantage, improving hit registration, offering dedicated servers (but of course), and robust anti-cheat. And I can’t forget that the game is specifically designed to be accessible to those with low-end or old PCs. To some extent, Riot has succeeded in all this – I know a few people will say peekers’ advantage still exists, but it’s hugely minimised.

The cost of Riot’s best attempts at anti-cheat, however, means that when you play Valorant you must download and use Riot Vanguard. If you listen closely you can hear the booing from the entire internet: shouts of it being deeply invasive, and whining about it being crap generally. Vanguard is invasive, and not just in the sense that it gets deep into your data, but also that it really screws with your computer as a whole. 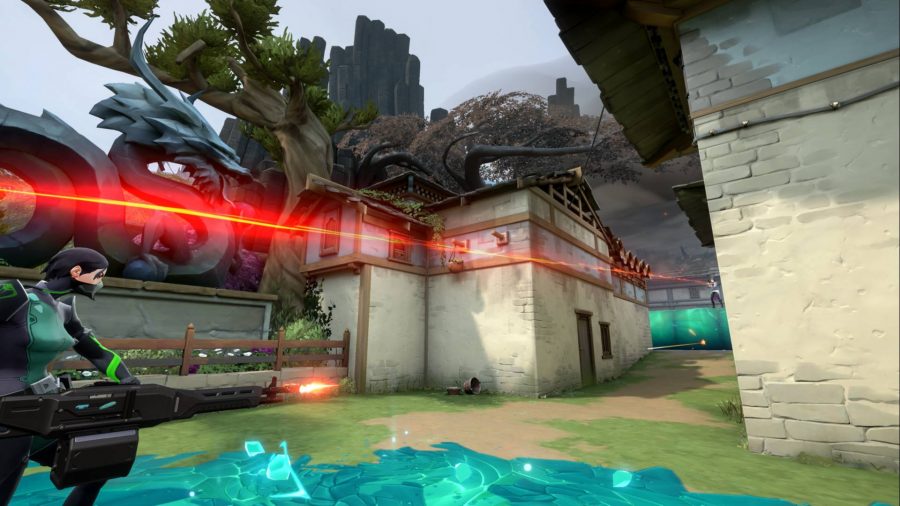 Anyone I know who plays Valorant has one story or another about their PC’s weird behaviour since downloading the game. Here’s one of mine: my computer crashes a lot more often now, both in general, but also specifically upon trying to open or close the game. It’s not pretty, and it has no bearing on the game itself, but if you want Valorant, you have to know Vanguard is a drawback.

These technical problems, however, are being worked on by Riot, which has acknowledged and attempted to fix all widespread complaints, bugs, and issues reported by the fanbase. Map changes, aesthetic changes, and balancing all happened, even within the beta, at a remarkable pace. Riot is really taking the time to listen and act on the input of players, which has improved the game day by day, and it looks like Riot will continue to do this until everyone is happy with where the game sits. Although confusing on occasion, the changes are welcome, and a good example to other developers about responding to criticism from a playerbase.

Valorant, on the whole, is a massive success. Riot has done a really good job adapting elements from other games to make what will likely be one of the biggest esports titles of the near future. It’ll be remembered fondly by many as the title that got them into multiplayer games, the platform that they remember during the lockdown period, or their go-to competitive shooter for years to come – Counter-Strike is still going strong after more than 20 years, after all. Valorant is hardly the most original game of 2020, but it has buckets of style, and the potential for similar longevity.

Valorant is not original. Rather, it’s a successful interpretation of and expansion on its inspirations, with impeccable gameplay, well-designed maps, and a dev team eager to refine it further.

Google Shows Off A Handful Of Stadia Exclusives

Hearthstone’s Next Expansion Is Scholomance Academy