Vampires secretly walk among us. They drive fast cars. Lord above us in penthouses. And are so refined in their tastes, they bite our wrists gently when feeding, hopefully keeping us alive for future snacks. Vampire: The Masquerade – Swansong explores the nightwalkers’ place in our world through a nicely designed narrative lens that embraces player choice in deep and satisfying ways.

Within the opening seconds of play, we learn that the vampires’ Boston Camarilla is on high alert; trouble arising moments after crowning a new prince to oversee their operations. The vampiric Masquerade law, which keeps their kind hidden from mortals, may have been broken, and it’s up to you to dive into the mystery to find out what happened and who is to blame. What comes next is roughly 20 hours of noteworthy discoveries.

As you pick up clues and blood trails, you’ll come across gruesome crime scenes, and will have to interrogate intelligent beings who want to bend your will. Most of the notable narrative beats pay off handsomely with big twists and empowering you with the feeling that you had an actual hand in figuring out the riddles. You also feel like a skilled vampire, using a variety of dark gifts to move the outcomes in desired directions.

This cryptic tale unfolds through the eyes of three different vampire protagonists, each at least one hundred years of age, with unique viewpoints into their society’s hierarchy. The story flows seamlessly between all three characters, some scenarios giving them time to breathe independently and other moments uniting them on the same hunt. 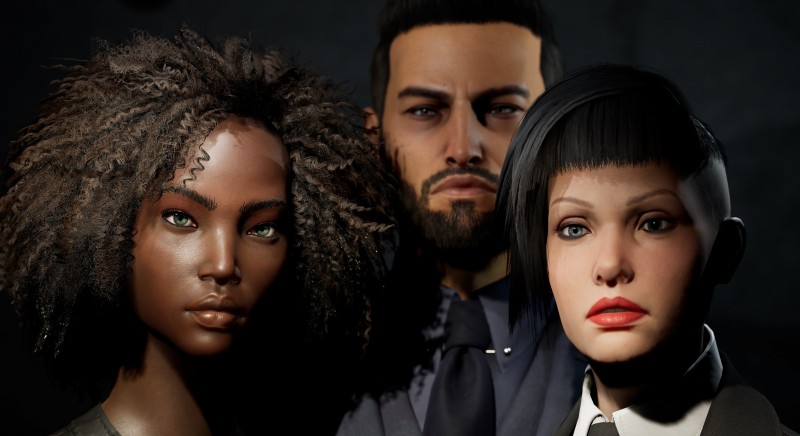 The most dynamic lead is Emem Louis. Strong in conviction and capable of visualizing clues tied to the five senses, Emem is often in control of conversations and can quickly pick up trails that lead to more profound mysteries. Leysha is equally interesting but a wild card, given how soft-spoken and forgetful she can be. Leysha can turn invisible or mimic other people’s appearances to remain undetected when investigating. Galeb Bazory is the weakest of the leads, struggling to take to the spotlight due to his comically gruff attitude and scenario designs not being as dynamic as the other characters’.

In most video games, vampires are monsters that use their teeth and supernatural abilities to tear living things to shreds. In this narrative RPG, we see a different side of vampiric might. All three leads solve most of their problems through conversations and deductive reasoning. Yes, they still feed on humans and rats to fill their tanks, but most gameplay is discussion-based. Getting into the mind of vampires is as wild and fun as it sounds. This unique invitation gets better when you learn the vampires don’t always play fair and can use their unique gifts to prey on the weak-minded. 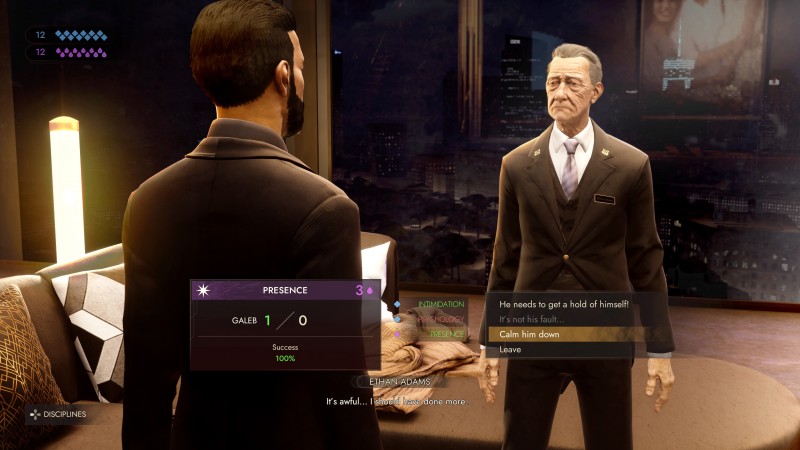 The vampiric powers come to life through surprisingly deep RPG systems used to manipulate dialogue. From the outset of play, you choose what gifts each vampire has and can further enhance these powers or add others throughout the game. As conversations unfold, the vampires can lean into intimidation, persuasion, psychology, and rhetoric to move the narrative in new directions, only if their skill levels are high enough.

Even after meeting a skill threshold in a conversation, success isn’t automatic. The people you talk to (both human and vampiric) are also gifted in their own ways and may counter your moves. You can cash in valuable willpower to increase your chance of success, but your opponent can do the same thing. You must weigh how aggressive you get in these conversations, paying close attention to what’s really at stake or there to gain. If you run out of willpower early in an investigation, you’ll have to play it safe for the remainder of it or scour the environment for consumables that can aid you (although they are hard to find). Character development is tied heavily to vampiric power usage, rewarding you with additional skill points whenever you succeed. I adore how this reward system works, as it ties in directly with the heart of gameplay. 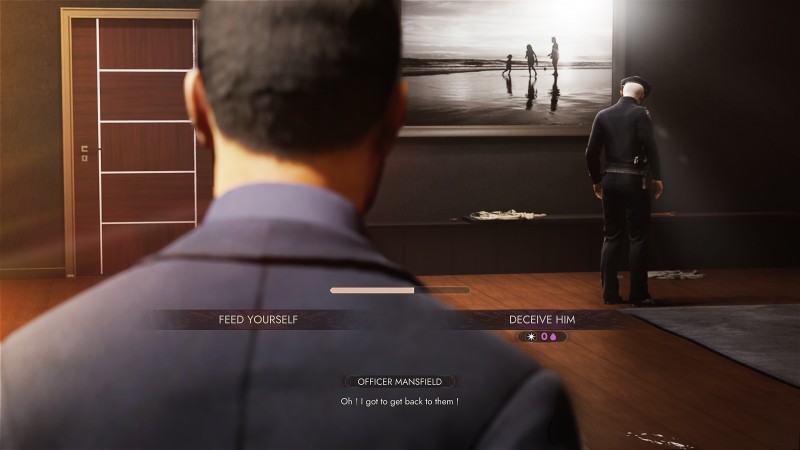 When both characters apply the same amount of skill – both delivering +3 in intimidation, for example – the success or failure of that narrative choice comes down to a dice roll. You actually see a die roll across the dialogue box to determine if you succeeded. It’s a surprisingly intense moment that happens often and is just one of the ways that show just how dynamic and challenging these chats can be.

The dialogue system that Big Bad Wolf Studio implemented is excellent to the point I anticipate seeing it in other developers’ games moving forward. The player is continually rewarded well by the backend RPG systems, as well as the narrative script, which does an excellent job of breathing unique life into each new character you meet. 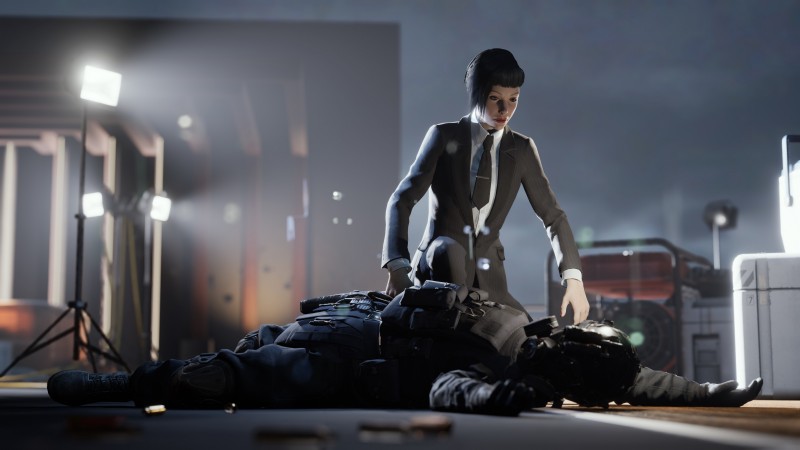 A seemingly innocent chat can suddenly turn intense and transform into something like a boss fight. These moments are called confrontations, which force the vampires to use their skills to achieve a certain number of successes. Each confrontation brings different win conditions, such as “you can only fail twice.” Failure doesn’t mean you have to start over; the narrative just veers in another direction. I don’t know how wildly different each outcome is, but I did see some dramatic changes in both setting and flow on a couple of missions I replayed. The game also offers a variety of endings, yet I can only speak to one of them, which I thought was quite good.

When the vampires aren’t talking, they study crime scenes. These moments are enhanced by RPG attributes, such as the ability to pick locks or use more sophisticated electronic equipment. Deductive skills and heightened education help make informed decisions. Unique character-specific skills also come into play. For instance, Emem can teleport using a power called Celerity, and Leysha’s stealthy abilities help uncover areas that others can’t explore. Big Bad Wolf does a nice job of not overselling solutions and pushes the player to read documents, dissect evidence, and follow the narrative threads to find clues hidden in rooms. The investigative elements are not as engaging as the conversations but still deliver plenty of fun, especially when exploring blood-soaked crime scenes.

You can feed on humans to replenish your hunger (another meter that governs ability usage). The feeding delivers that well-known vampire quality but feels shoehorned in and at odds with the investigative flow. And don’t expect to be dazzled by the visuals. The environments look nice, but most animations are mechanical, especially in the characters’ facial movements, which you always see.

Swansong is this year’s Forgotten City, a distinct narrative adventure that soars from the chances it takes. Player choice is front and center, and it’s nice to see these decisions turn into little games that carry significant narrative weight. Rarely have I played a game where I wanted to restart a scenario to undo bad decisions as I have here. Swansong makes you pay for your missteps and should be an excellent game for watercooler discussions with others who have played it.

‘The Bold and the Beautiful’ Spoilers: Where’s Bill Spencer (Don Diamont) When You Need Him?