SCS Software has been in the business of making virtual renditions of the real world for many years now. I’ve been a fan of its products since childhood. You would think that after all this time, anything new would trigger just a tiny happy response from someone like me. That said, I wasn’t quite prepared for the experience that Euro Truck Simulator 2 – Iberia has to offer.

This is, without any sort of hyperbole, just about the best expansion the studio has put out yet. Despite Euro Truck Simulator 2‘s advancing age, this expansion — combined with the recent graphical overhaul in update 1.40 — makes this something that any truck sim fan needs to enjoy for themselves in order to get the full sense of what I’m about to describe.

Oh, and it’s important to mention that you don’t need the Vive la France! expansion in order to access the Iberian peninsula. You can sail to the northwestern shores of Spain by means of a ferry from the UK. Alternatively, you can also come in from the east by means of Italy. So, anyone can experience this great new map — and it surely is worth it. Why? 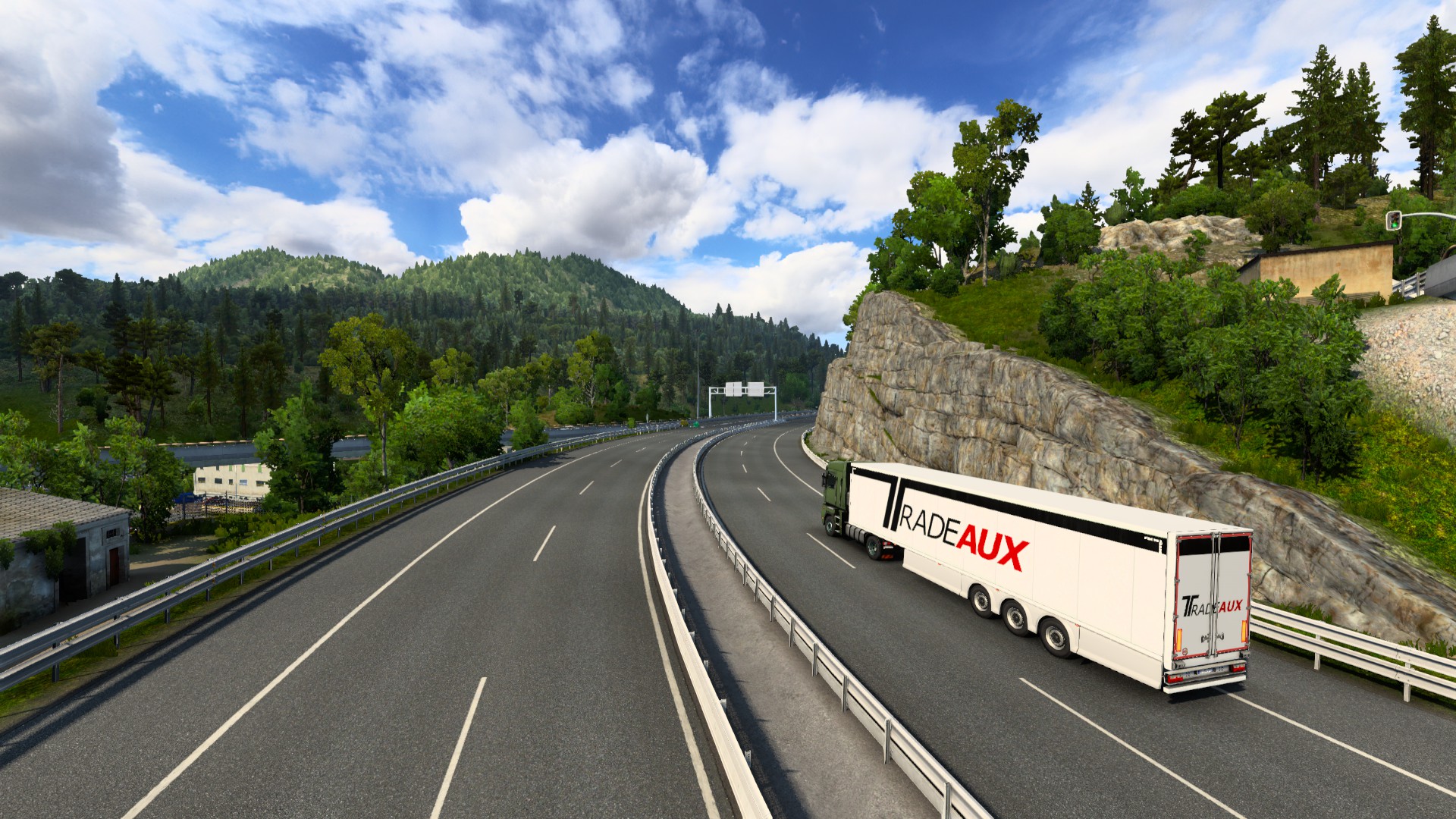 First impressions are everything.

Beauty from the first kilometer

My journey began by picking up a job in Toulouse, France. I headed southwest past the newly added city of Bayonne, and then across the border. The immediate transition between the two countries was far more subtle than I was expecting, but the changes quickly started to become apparent. The foliage changed, the topography became more mountainous, and road networks were more intricate. Soon, I was rolling through the Spanish countryside of its northwestern region, admiring the sheer beauty of it all.

They say first impressions are everything, and this introduction was concluded quite nicely when coming upon the first settlement of Bilbao.

Immediately, I noticed the density and great detail of the buildings and overall infrastructure. This is true for the vast majority of other settlements throughout the map — and there’s a mind-boggling 49 of them, much more than past expansions. Bilbao also provided another first: an enclosed trailer depot, which there are a few of around the peninsula. These are far more trickier for deliveries, but thankfully I only came upon it to pick up another trailer for the next job and it was already parked outside. From here, I moved further west along the coast to A Coruña. 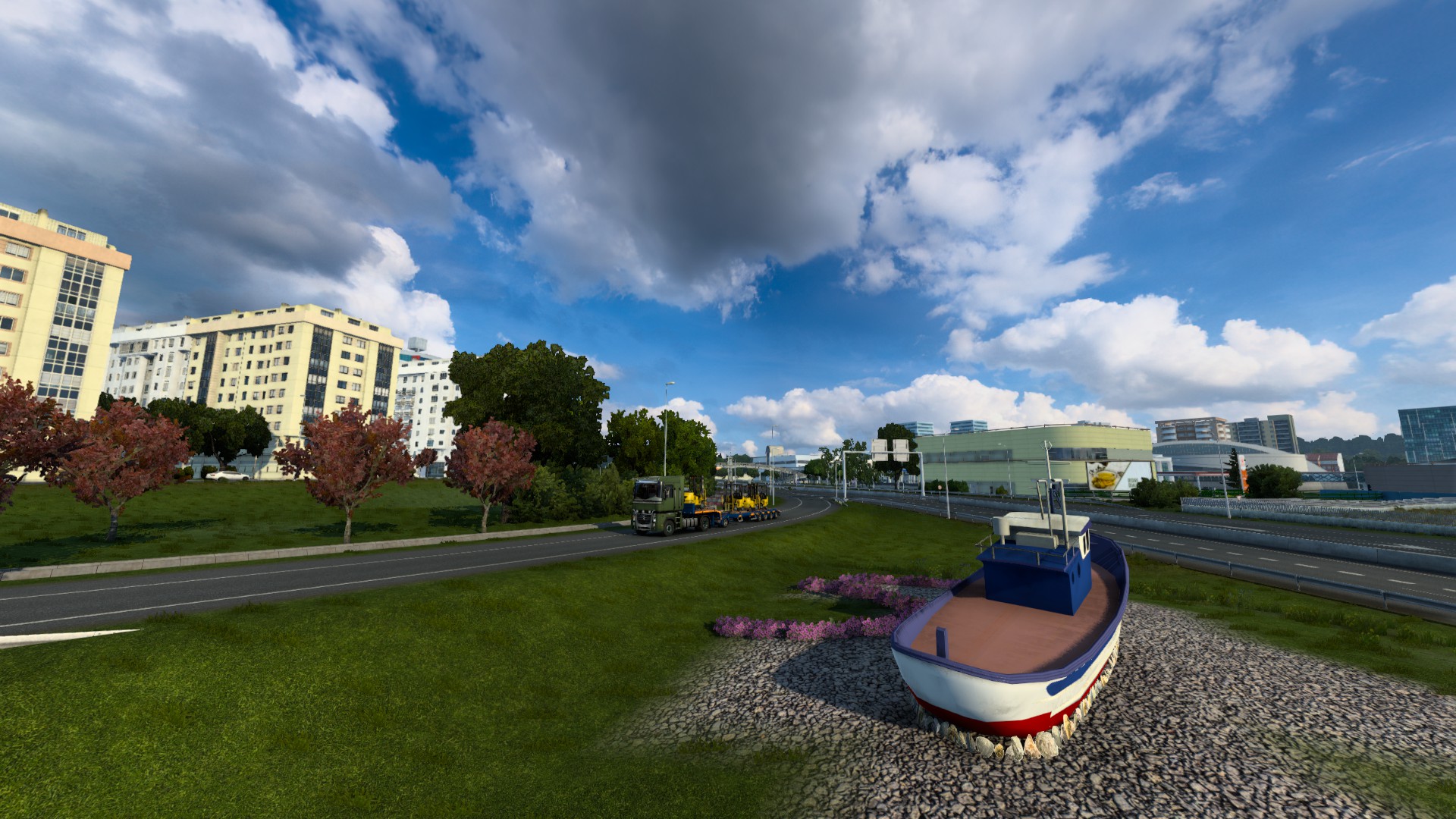 The scenery detail is rich and plentiful.

The journey along the coast provides some epic views of the many beautiful towns that straddle the coastline. A lot of these towns are labeled throughout the map. However, I noticed that some of them are considered ‘Discovered’ even if you’re a little ways out, while others seem to require you to drive directly into them. This becomes a hassle if they don’t connect back to the Autopista.

A Coruña proved to be another great example of SCS’ scenery designers just straight up flexing. The industrial and urban sectors of the city are on full display here, and all of the models look well-made and very believable. Really, this is something that I noticed when driving through a lot of the new settlements; they’re so well detailed that I feel like if I ever get to visit Spain and Portugal in real life that I’ll end up having déjà vu. 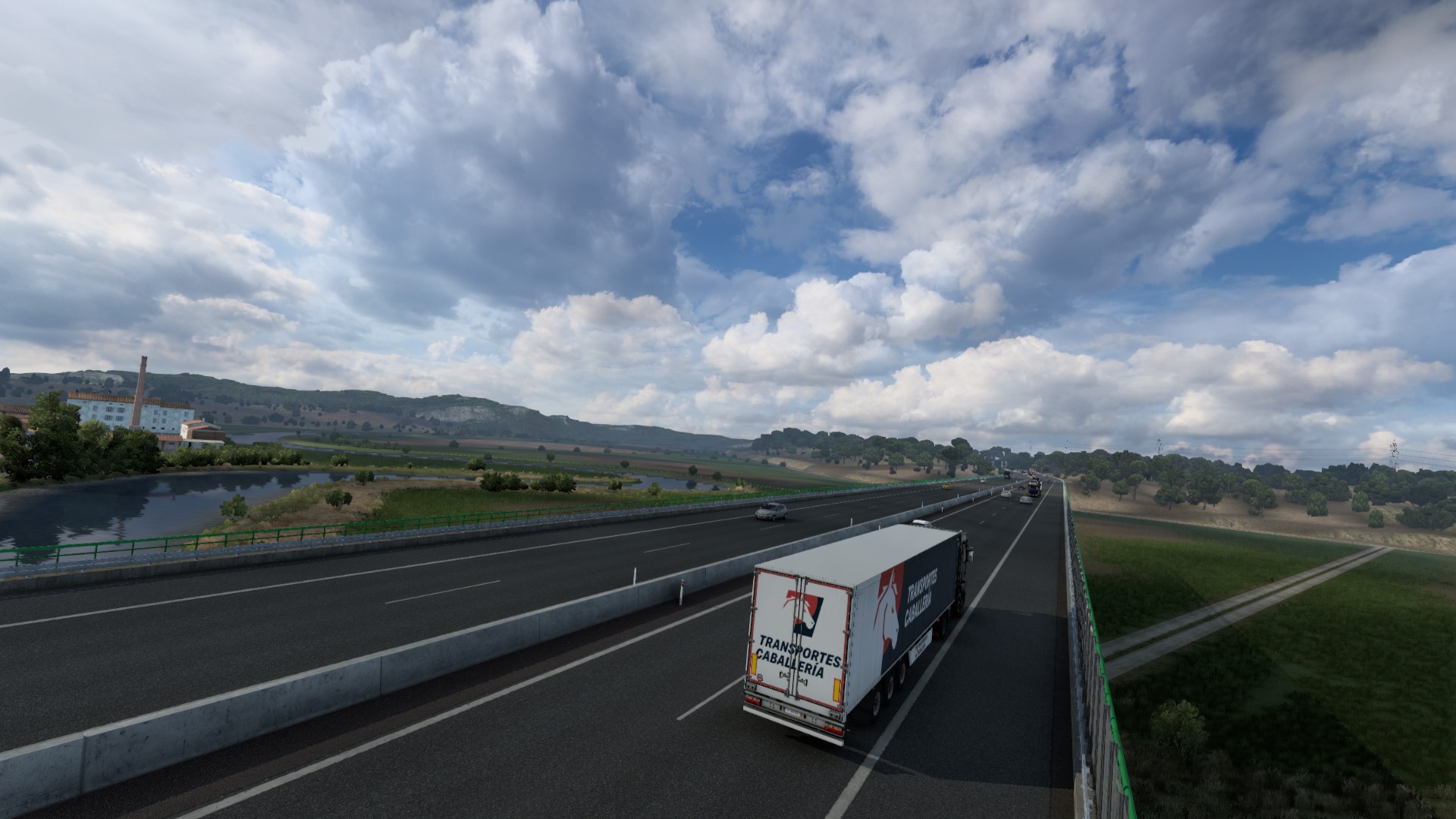 Portugal has its own unique beauty too.

Speaking of Portugal, that’s what the next part of the journey includes. From A Coruña, I drove south to Lisbon, the capital of the country. Most of this section of the trip took place at night, but I arrived in Lisbon just in time for sunrise. With the new lighting engine illuminating the environment and the aforementioned rich scenery detail, the entrance was quite the sight for me.

With Portugal being so much smaller than Spain, the next job from Lisbon to Huelva would take me across the border again. That said, I did get to enjoy Portugal’s unique beauty while along the way crossing over beautiful earth-toned valleys and farmlands, surrounded by hues of brown, green, and gold. Even in this more rural part of the country, a lot of super minor settlements are modeled and visible, further adding to the overall immersion factor that this expansion has to offer. 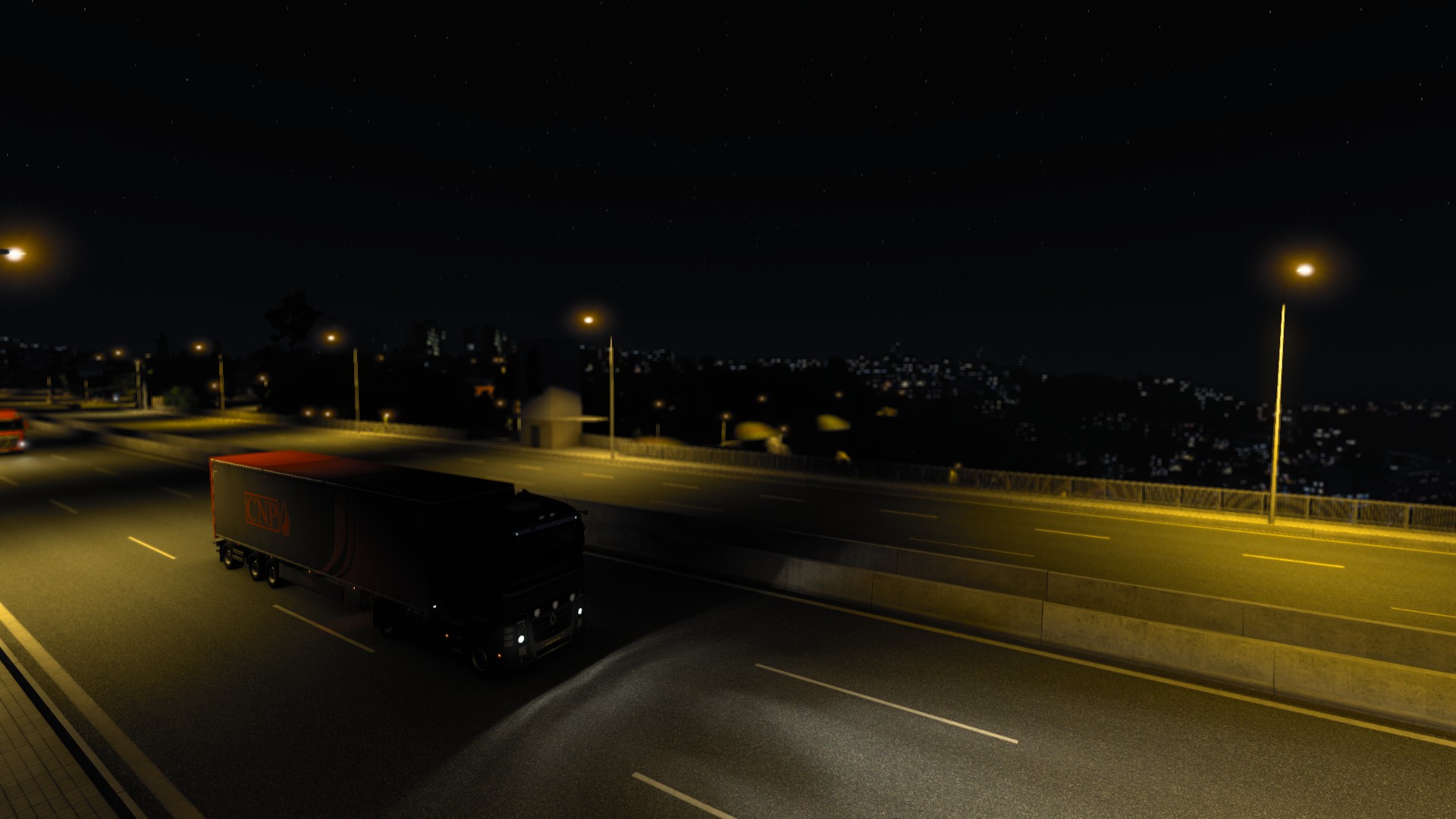 By the end of my short time rolling through Portugal, I came across a surprise: a scenic Viewpoint (which there are five of throughout Iberia). These were introduced in the Idaho expansion for American Truck Simulator: cinematic cutscenes which show off gorgeous views of important scenery. In this case, it was the Guadiana International Bridge that connects this southern part of Portugal to Spain. It would be nice if major landmarks like this were better labeled, like in Microsoft Flight Simulator. Otherwise, you can just drive past them without realizing their significance other than, “Oh, that looks neat.”

Back in Spain, I ventured eastward to visit Algeciras. Nothing about this city is particularly special, except for the fact that it’s now the southernmost of the entire map of Euro Truck Simulator 2. It sits on the southern coast of Spain, directly north of Morocco. I decided to visit just to see if I could spot even a hint of Africa across the Strait of Gibraltar, but unfortunately that’s not the case. Nevertheless, this likely going to be the furthest south you can get in the sim forever. 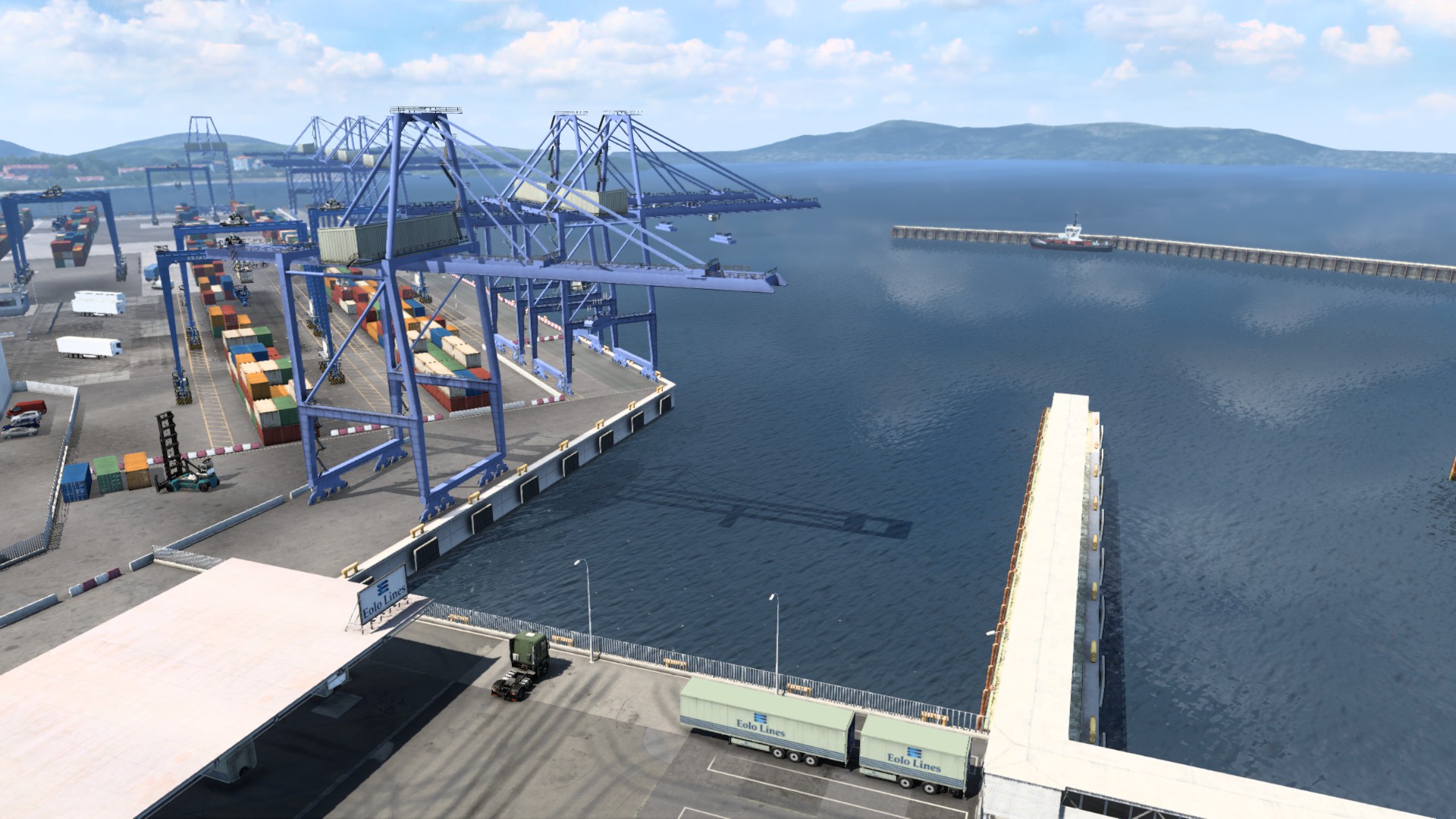 This is now the southern edge of ETS 2‘s map.

At this point in the journey, it has taken me approximately six hours to get from the French border in the northwest down to the southern tip of Spain. I pondered if I should continue along the coast, but decided I needed to be the central portion in order to give a good overview. So, after a quick shuttle run eastward to Málaga, I picked up a job that would carry me to Spain’s capital of Madrid.

This section was also shrouded in the cover of night, but like before, I reached my destination at sunrise. I was expecting a grand entrance, but Madrid is surprisingly quite modest. It seems like only the industrial sectors at the outskirts of the city are modeled; the road network even goes around in an oval. A bit disappointed in what was expected to be the big finale, I decided to cover one last swath of the land by heading northeast to another major city, Barcelona. 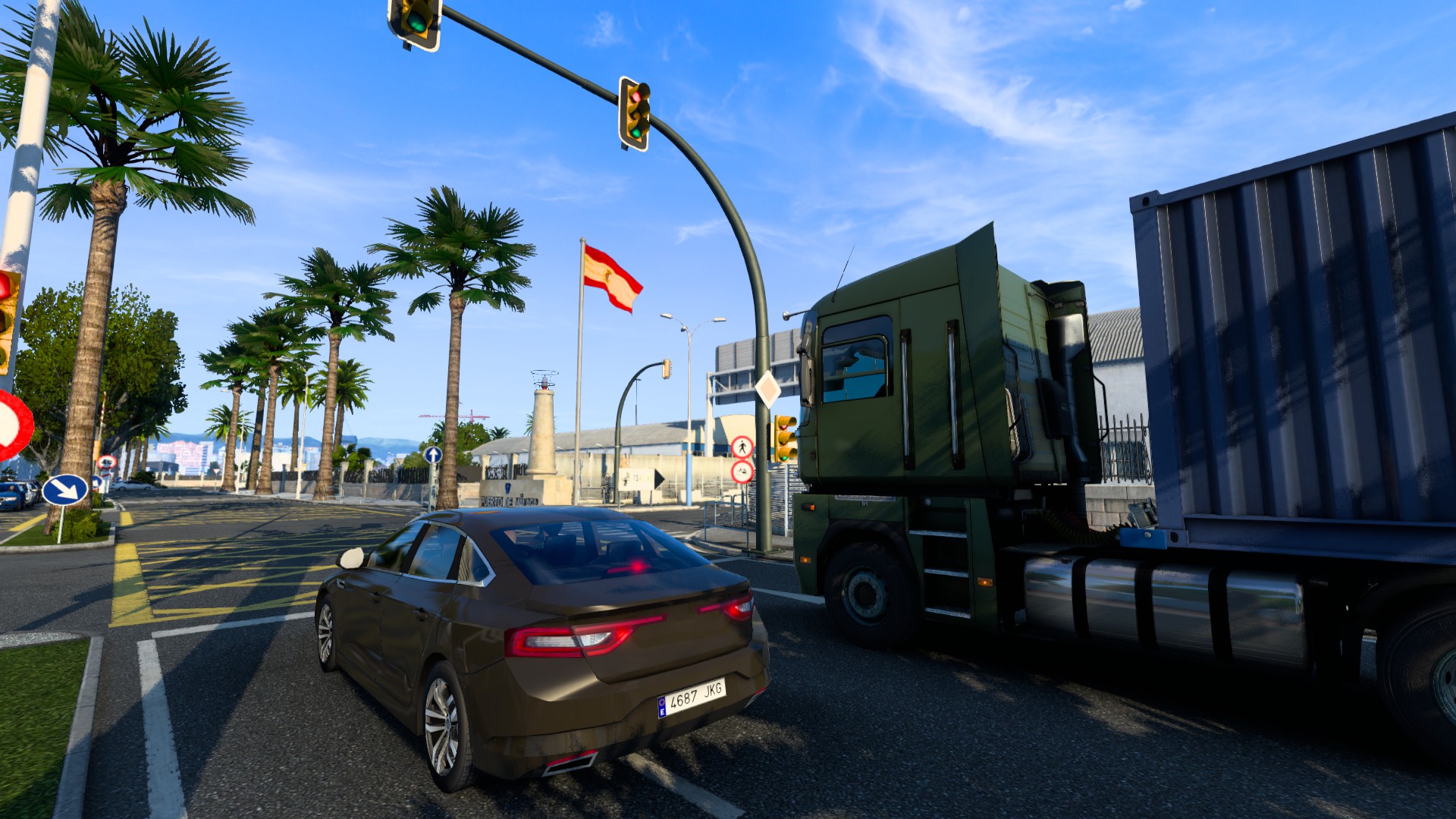 I feel like I’ve taken a real road trip.

This was the most modest part of the journey in terms of scenery complexity; not as vivid as the other parts of the map, though this just might be how this region of the country really is. Like Madrid, Barcelona’s core city doesn’t appear to be rendered, just the outskirts. Yet, it didn’t damper my sense of pride to know I had made it around a good chunk of the new map.

In all, the journey took a whopping seven hours. And that’s not without even properly driving through half of the mapped settlements. I still haven’t seen most of the eastern coast of Spain, nor the northern-central interior. But, I felt like I had seen enough to say you definitely need to give Iberia a playthrough. 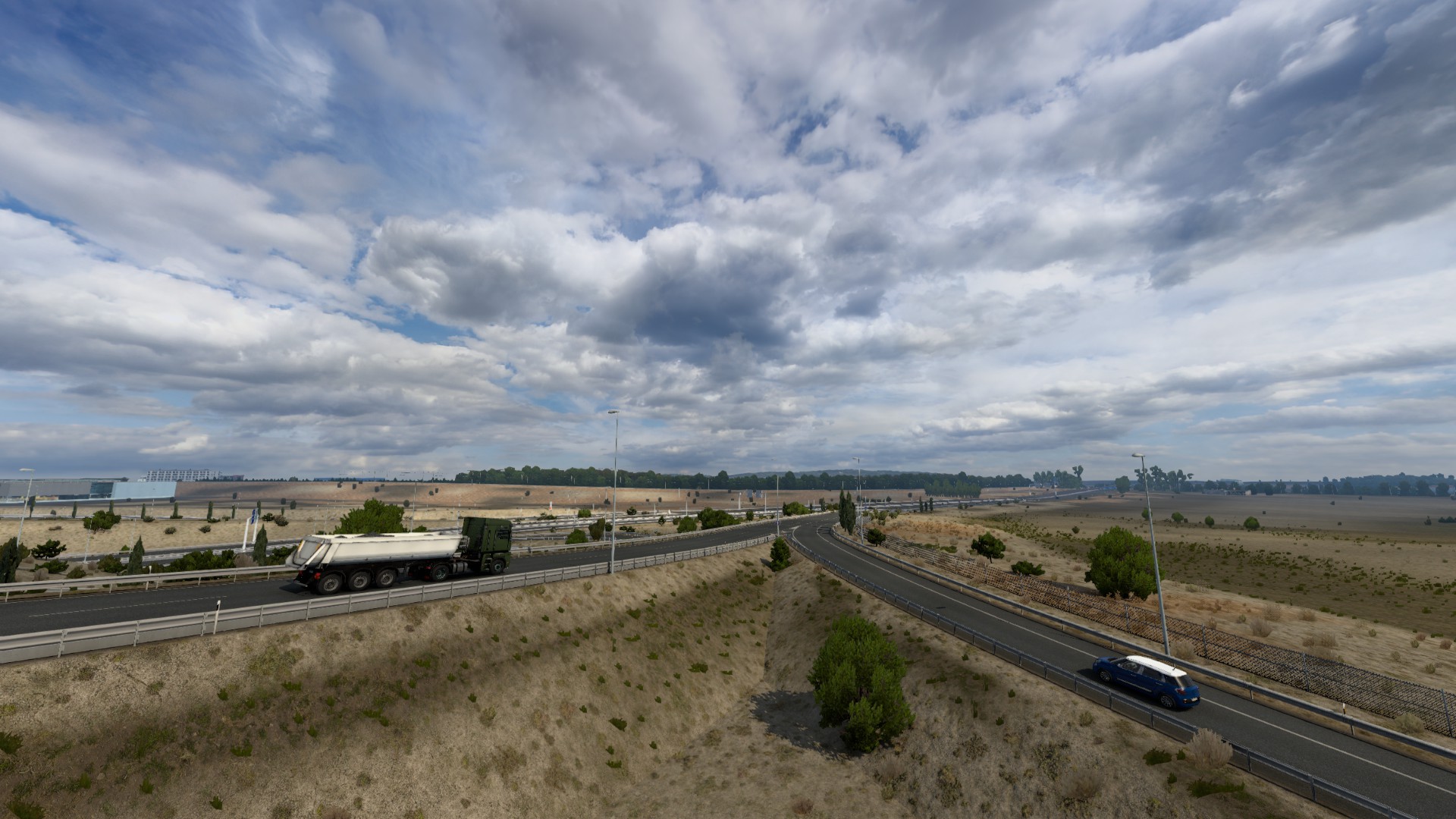 Iberia is massive, and that’s great.

After having scouted out the land by means of Microsoft Flight Simulator, I had a fair idea of what to expect from SCS’ full ground-based rendition. And by all means, the designers have captured it amazingly. Considering I recently purchased the Vive la France! expansion to ‘properly’ enter the new map, I was surprised by the difference in complexity. That older expansion seems far more basic compared to the immense amount of detail that this newer Iberia expansion has. Clearly, SCS’ skills have grown since then.

With so much new stuff to see in this new expansion, it’s going to keep you trucking for hours on end.