Weird West is a spellbinding, isometric portrayal of the Wild West. From the minds behind Dishonored and Prey, this compelling immersive sim is unlike any western tale you’ve experienced. Its macabre frontier isn’t just a land of cowboys and cattle but one brimming with old magic and hideous monstrosities like werewolves, flesh-eating sirens, gold-hungry zombies, and bewitched trees capable of trapping the souls of men.

The game’s main narrative is a five-chapter anthology following the lives of five “heroes” – a bounty hunter, a man-turned-pig, a tribal protector, a werewolf, and a zealot – whose journeys are unknowingly connected. You play as the Passenger, a faceless entity who possesses a new protagonist in every chapter for mysterious reasons. The story begins by following a rancher who’s given up her old life as a bounty hunter but must dig up her irons to rescue her kidnapped family member. What starts as a safe, conventional cowboy revenge story unravels into a tale of unbelievable outcomes. You’ll help a poet lift a curse in one moment, causing him to only speak in rhymes. In another, you’ll contemplate turning in a sheriff after discovering they’ve converted the jail into a meat market and are feeding on imprisoned criminals’ corpses. After a slow start, Weird West quickly ups the ante in thrilling and absurd ways, and just when you’ve figured things out, something unexpectedly changes. It’s so fun seeing how each chapter spirals into another with every new revelation.

While the mythology of Weird West is enchanting, its sandbox gameplay brings the world to life. You can solve most problems via stealth as long as you stay out of sight and adequately hide bodies, though there’s a bevy of guns, bows, and melee weapons enticing you to engage in the game’s raucous twin-stick-style shoot-outs. Blast foes into bits with the shotgun’s screen-shaking burst, fan the revolver’s hammer to unleash a rain of bullets, or quietly eliminate opponents with Sentry Silencer. This unlockable rifle ability silences your next shot and doubles damage to unaware enemies.

Each of the five protagonists wields unique spells in addition to perks like increased health or movement speed they share with the other characters. The Pigman can deflect bullets with his rubbery skin, soak the surrounding ground in poison, or charge enemies headfirst to deal devastating damage. At the same time, the Protector is capable of summoning spirit bears or tornadoes that can be imbued with elemental properties. Combat requires a level of precision best suited for mouse and keyboard, but if your only option is to play Weird West with a controller, I’d recommend using the game’s Tactical Mode, which slows time down to let you better plan out your movements. 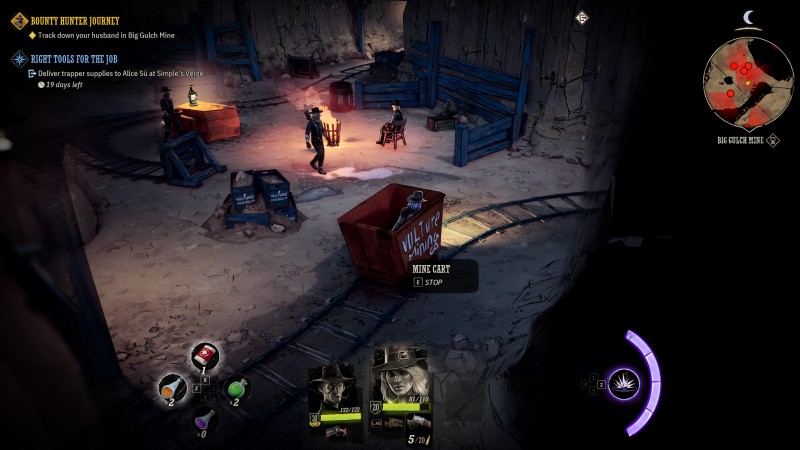 You could aim at the apparent red-hued TNT barrel for a loud explosion or blast away at a box of ammunition, sending a barrage of bullets in every direction. However, I don’t recommend the latter method if you’re low on ammo. Many enemies have weaknesses like fire or poison, but sometimes you’ll find yourself low on supplies. Instead of using a dynamite stick or molotov cocktail to cause a fire, equip the bow and arrow next to a nearby flame to create a fire arrow. Make sure you don’t accidentally blow yourself up, as I did several times. If you set yourself on fire, quickly find a water source – a pond, bathtub, or even a water pump – before burning to death. These physics-based interactions make me enjoy solving the game’s challenges, though it’s frustrating when awkward camera angles hinder my best-laid plans.

The overworld of Weird West is large and populated with dozens – nearly hundreds – of diamond-shaped nodes representing the many homesteads, towns, and stretches of wilderness you can travel between. The map’s abundance of locations is sometimes overwhelming, with new areas cropping up on almost every trek, though I am often rewarded with new loot when I stop. In addition to serving as trade hubs and places of rest, towns are often places you can hire mercenaries to join your posse as party members. While some hired hands will help your cause free of charge – revenge often serves as a better currency than coins – many will require a hefty upfront fee before lending their trigger finger.

How will you earn money, though? You could break into the bank and rob its coffers if you have enough dynamite or lockpicks. Though choices often come with consequences (even outside of story moments), it’s better to return at night when the bank’s closed if you want to avoid a shoot-out or a criminal reputation. With a rope in your inventory, scale the bank’s rooftop and quietly enter through the chimney chute. Regardless of approach, Weird West entertains a bevy of playstyles, often encouraging me to look at situations through a different lens.

Whether in notable moments or otherwise forgettable encounters, Weird West remembers everything you do. Side characters you betray will show up much later, sometimes during pivotal moments, to enact swift vengeance. On the flip side, new friends – like the lady whose land deed I retrieved – might show up in your time of desperation if you assisted them earlier in your journey. These consequences add significance to even the smallest choices, and you never know how the world might react to a decision. If you eradicate all of the people in a town – yeah, I’m looking at all of you sickos who did this while playing Skyrim in high school – the space will become abandoned. After enough time passes, it will become a literal ghost town, as ghoulish monsters attracted by the smell of rotting corpses take up residence and permanently transform the establishment into a hellish domain.

Weird West’s best assets are its well-developed characters and deep gameplay systems, but its overall production value is underwhelming. The game’s cell-shading looks good enough on higher settings and large screens, but the composition quickly becomes muddy on less-powerful machines like my Steam Deck. Additionally, a minor bug prevented me from saving my game occasionally, leading to several frustrating deaths.